Eye-witnesses tell of terror unfolding on our streets

"Blood was everywhere. She was all stabbed in her back. She had a slice in her arm and then her friends were there. When they ran out they were all over her. I rang the ambulance. We stayed there until the police came, armed police." 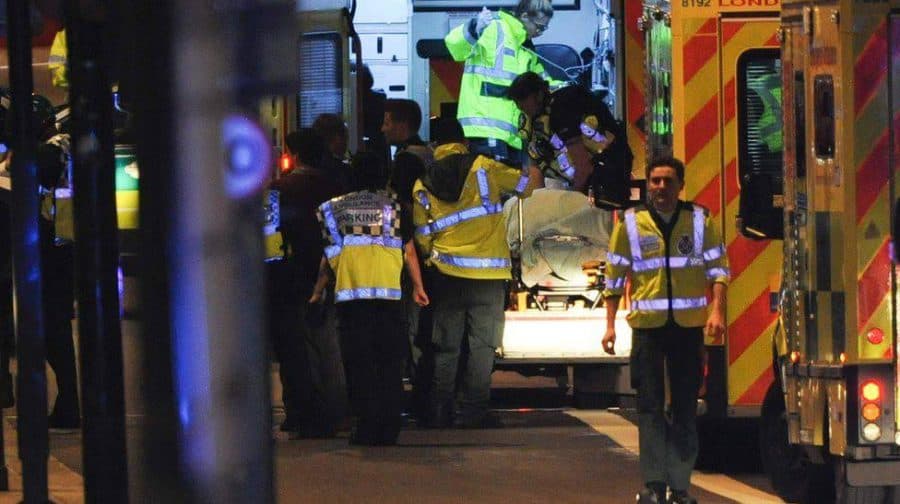 The massacre last night on London Bridge and in the bars and streets around Borough Market claimed the lives of at least seven people, with another 48 injured, some critical, as two eye-witnesses told the News of their horror as they found a young woman ‘bleeding to death’ outside one pub with more injured inside.

Luke Beau and Harry McCarthy were unaware of the savagery unfolding until they came across the woman in an alleyway by the Mudlark pub below London Bridge, but within moments the scale of the attack became horrifyingly real.

“No one knew what had happened, it had just happened. We were like – is that a body? It just looked like a bundle outside. And she was breathing like just one laboured breath, like not enough breaths,” Luke told the News.

“Blood was everywhere. She was all stabbed in her back. She had a slice in her arm and then her friends were there. When they ran out they were all over her. I rang the ambulance. We stayed there until the police came, armed police.”

The two friends were on the way to Nandos after enjoying an afternoon out watching the Champions League final in the area near their Bermondsey home.

Within minutes the chaotic scenes around London Bridge were beamed across the globe as yet another terror attack was relayed to the world, the third in the UK since March. At first viewers were horrified to hear of an almost identical attack to that of the Westminster Bridge killings just weeks before, with reports of a speeding van hitting pedestrians on the bridge at 10.08pm.

However, it then became clear that the suspects had jumped out of the van, wearing what police later described as hoax explosive vests and went on a killing spree targeting the area’s busy bars.

“Oh they must have been moments away from us,” Harry said.

“As we looked in the pub they were all just eating their dinner, laughing and joking.” But within moments everything changed. “Everyone was running. The police came, they told us to get inside the pub, then there is another girl on the floor with her throat sliced in the pub. From what we heard afterwards it sounded like it had happen outside. She’d run in.

“They got us all upstairs in the pub and told us to get away from the windows. We were stuck up there for 20 minutes, then the police kept coming in and said ‘look you are safe there are armed police outside’, and then they evacuated us out the back way and there could have been another girl we saw, or perhaps it was the same girl.”

“If she survived then that’s a miracle from what I see,” Luke added. “I’m 29 – she must have been younger, she was younger than 30. That poor girl.”

Both men were in shock from their ordeal as they told the News their story just an hour after leaving the Mudlark pub and believe that they witnessed the woman die in front of them: “She died in front of us. The look in her eyes,” Luke added.

Today police have closed off much of the area. Victims have been taken to five hospitals and full details of everyone lost to this latest terror attack are still coming in.

London Bridge Station will remain closed for the rest of the day and Borough Tube station is also shut.

Southwark NewsNewsEye-witnesses tell of terror unfolding on our streets