Previously helicopters had to land in Ruskin Park, adding 25 minutes to the emergency transfer. 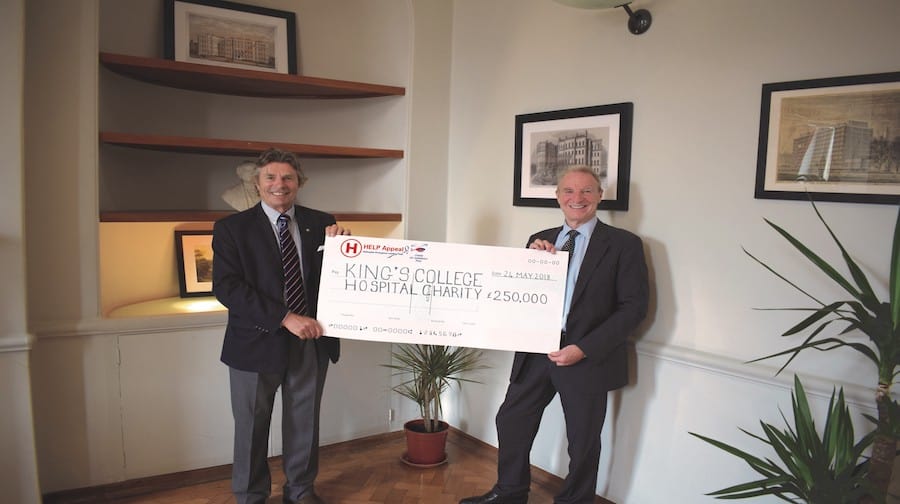 It is the only charity in the country dedicated to funding hospital helipads. The charity has pledged to donate a total sum of £2.75 million to the hospital. Robert Bertram, Chief Executive of the HELP Appeal, said: “It’s great to see how our donations have made such a difference to a significant number of critically ill patients who’ve been rescued from across the South of England.

“We are hugely grateful to the generosity of the public as we don’t receive any funding from the government or national lottery.”

The charity started donating the money to King’s in 2016 and have created firsts for the Camberwell-based hospital, including a lifesaving helipad with a Deck Integrated Fire Fighting System (DIFFS).  This was first  to be built on the mainland, previously the state of the art system had only ever been used in offshore oil rigs.

The system incorporates a series of nozzles which are integrated into the helipad and spray water and foam. It can put out a fire within 15 seconds, allowing air ambulance crew to continue treating and transferring a critically ill patient to the emergency department as quickly as possible.

DIFFS has allowed the hospital to reduce staffing costs with firefighting teams no longer required to fight a fire. These savings have been allocated to other lifesaving services.

In an excellent proof of the helipad services, 40-year-old Tom Locke (pictured below, with his partner and three boys), had to be rushed into the hospital by an air ambulance, last October. The father of three from Hythe in Kent, fell three storeys from the roof of his house while trying to remove nesting pigeons from behind solar panels, and suffered multiple grievous injuries.

Locke was intubated at the scene and arrived on the helipad at King’s around 25 minutes later. His partner, Lydia Clark, who had first called the hospital for help, said: “Without the helipad Tom may not have made it in time. This whole experience has had such a dramatic effect on all our lives, and thanks to the helipad and team at King’s our family has been kept together.

“Looking back, I can see how much difference the extra minutes the helipad saves can make – the traffic near King’s was so bad on the day that Tom was brought in that I ended up getting out of the car and running to the hospital.”

King’s College Hospital is one of four major trauma centres in London, serving a population of 4.5 million people. Over the past year and a half, there have been 362 landings on the helipad, which is an average of four landings every week.

Previously helicopters had to land in Ruskin Park and then patients were moved to a road ambulance, adding 25 minutes to the emergency transfer. In the first year after the helipad opened, 162 patients were brought to King’s by air ambulance.

“We are extremely grateful to the HELP Appeal and its supporters for funding this project to help King’s deliver life-saving care as quickly as possible.”

To find out more and to donate visit https://helpappeal.org.uk/