'We are enormously proud of Lois for her swift actions, for remembering what to do, for embracing the situation, and doing the right thing' 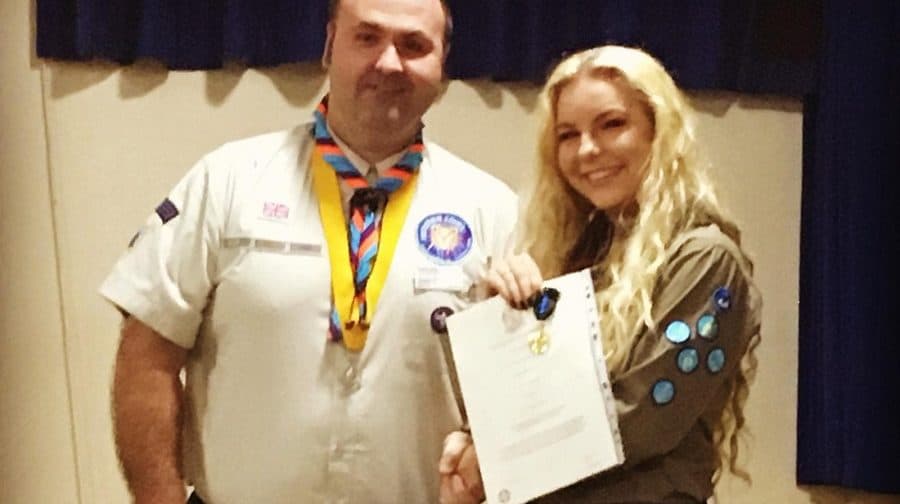 Lois with her gallantry award

A young scout from Camberwell has been given a gallantry award after her quick-thinking saved the life of a man stabbed outside her home.

Last year, her first-aid training were put to the test last year when her father witnessed a young man being repeatedly stabbed outside their home.

After the attackers fled, Lois gave the victim him first aid and directed her parents – neither of whom had first aid training.

Mum, Joanne, explained: “Last November my husband Tony was walking our dog, it was about 11pm.

“A man came running down the alley/walk way screaming and there were about eight to ten people running after him.

“He got cornered and they were stabbing him.

“All this happened in front of Tony who then brought him into the block once they had stopped and run off.

“I was already on the phone to 999 because I had heard the commotion and looked out the window and Tony had motioned to me to call the police.

“He brought him into the hallway of the block and I was calling Lois from upstairs.

“Tony put him on the floor and went outside to look for the ambulance.

“Once Lois had seen him she run and got towels and was telling me to keep speaking to him.

“She told me what to do basically, like how to get him into recovery, and helped me do it because he was a big guy.

“We were talking to him and I had my hand on his neck which was pouring with blood but Lois realised that it was his back that was the worst and needed the most attention, so she got more towels for it and was applying  pressure to it.

“At first I was worried to push to hard because I thought I’d hurt him but she was saying to push on the wound harder.

“She was also telling me to scream at him to wake up because he was starting to lose consciousness.

“Then they police turned up and took over, they were amazing.

“I wouldn’t have had a clue what to do and really don’t know what I’d have done without her there.

“We are very proud of her.

“She’s been part of the scouts for years and it’s obviously paid off.”

The victim was taken to hospital and spent two weeks in a coma, when his life ‘hung in the balance’. He has now made a full recovery.

According to the emergency services, without Lois and her parents’ help, he would have died before paramedics arrived.

In a statement to the News, a South London Scouts spokesperson said: “As you can imagine, this is a fairly traumatic event to go through at any age, no matter what the outcome may have been, no matter how you may have been involved.

“We are enormously proud of Lois for her swift actions, for remembering what to do, for embracing the situation, and doing the right thing.

“All those things fell into place, and have resulted in a young man being given back a life that was almost taken away.

“It is the greatest gift anyone could given another person, which is what this award recognises.”

The scouts was set up with the aim of helping to develop young people and help them achieve their full potential – whether physical, social or intellectual – and become responsible citizens.

South London Scouts are aged between six and 25, and enjoy adventure challenges and volunteering.