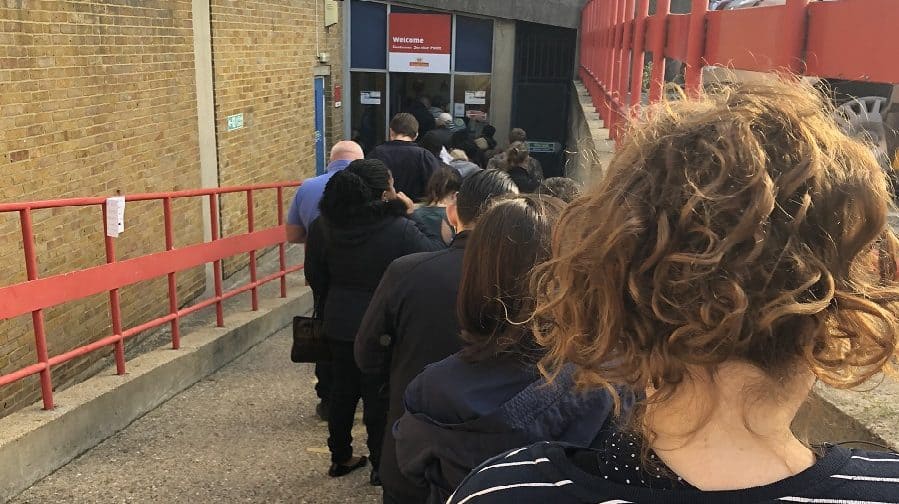 At just 10am, he found himself 48th in the queue, but after half an hour of waiting outside he was greeted by a sign put up by staff saying: “Due to massive resourcing issues beyond the staff control items from the previous day and other issues will not be ready.”

In a formal complaint submitted to Royal Mail, Mr Dignan has said his experience waiting outside in the weekend cold snap was ‘disgraceful’ and ‘shames’ the service – and says he is worried he will be in for more disappointment in the coming days when he tries to collect his parcels.

He told the News: “I’m just pleased the weather was as it was. Pneumonia as a result of being exposed to Peckham’s winter elements for over an hour is a high price to pay simply to collect a set of pre-loved napkins.

“The great British public deserve some praise. They acknowledged that the fiasco was totally out of the control of the charming and much put-upon Royal Mail counter staff, and from what I can see, treated them with the utmost sympathy and respect.”

Twitter user Karen complained: “Currently over 30 minutes outside Peckham sorting office with at least another 45 minutes wait following your closure of Silvester Road in East Dulwich – an absolute joke and you should be ashamed of yourselves – not to mention the extortionate parking costs.”

While Simon Edwards claimed that since the closure his first class post had been ‘delayed by over four days’ – and risked ruining his daily coffee subscription. Others are already panicking about Christmas.

Highshore Road resident Derek Kinrade said the move had made traffic worse for him and his neighbours, telling the News: “Having suffered for years with Royal Mail vans racing to and fro, and articulated lorries backing the length of the road to deliver to Rye Lane shops, the closure of the East Dulwich sorting office has doubled the traffic to the famous ‘meeting house’ depot.”

As the News reported last week, the decision to close the Silvester Road sorting office in East and relocate to Peckham had sparked outcry and a hard-fought residents’ campaign that Dulwich and West Norwood MP Helen Hayes had taken all the way to parliament.

Writing in the News last month, Ms Hayes said “It is testament to an organisation which is quite clearly putting profit before the residents it serves that Royal Mail has not changed their plans for SE22.”

The move went ahead in the face of continued opposition on September 17, and has been branded ‘total chaos’.

As the News reported last week, residents have been left missed delivery cards or sent emails telling them to go to the now-shut Silvester Road office.

Royal Mail has apologised for the errors and delays, citing ‘teething problems’, with a spokesperson telling the News: “Royal Mail apologises to any customer who had to queue for longer than normal at Peckham Delivery Office recently.

“We are working very hard to resolve the teething issues that we had last week.

“The office has extended its opening hours from today, which now means it will open to 3 pm every day, late opening on a Wednesday until 8 pm and until 3pm on a Sunday.

“Customers do not need to travel to the office if they don’t want to, they can use our free redelivery service which means their item can be redelivered to their address or another in the same postcode area, including on a Saturday, by calling the number on the card that we have left with them.”

But residents across the borough are now even more worried about closures elsewhere – despite Royal Mail’s assurances. The Kennington and Walworth delivery office on Crampton Street is expected to move to Bermondsey’s Mandela way in January, 2019. West Norwood’s Windsor Grove office is slated to relocate to Annerley, though the date is as yet unconfirmed. A petition against the West Norwood closure has received 1,988 signatures.

Walworth resident Jeremy Leach, from the Walworth Society, told the News: As well as the much-highlighted loss of the Sorting Office in East Dulwich, we in Walworth have also been fighting the threat from Royal Mail to close our sorting office over the past couple of years.

“Owing to the chaos and hardship that the move in East Dulwich is clearly bringing, we ask Royal Mail to halt its plans and to ensure that a parcel collection facility is provided in the Walworth Road area.”