The route starts at Nicholson Street and passes along Southwark Street, London Bridge Station and Guys Hospital to arrive at the Tower Bridge Road and Tanner Street junction. 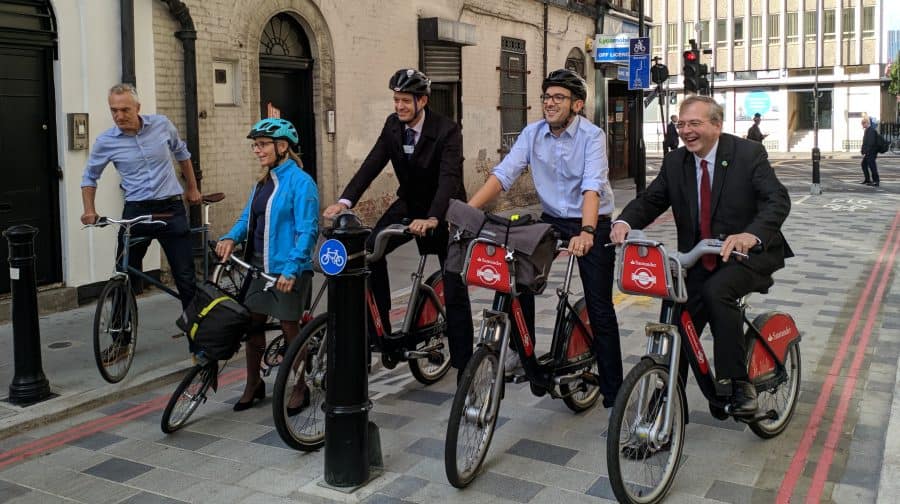 Richard Livingstone, Will Norman and others from TfL, Sustrans and City Hall, who all took to their bikes for BBC London yesterday morning. Courtesy of Southwark Council.

Transport for London yesterday opened the newest section of the Quietways network of bike-only routes in Southwark, writes Hannah Kanik…

Designed to make roads safer and healthier the route, Quietways 14, is marked by purple signs and runs from Blackfriars Road to Tower Bridge Road.

It starts at Nicholson Street and passes along quiet back streets near Southwark Street.

It goes past London Bridge Station and Guys Hospital to arrive at the Tower Bridge Road and Tanner Street junction. Courtesy of Transport for London

Quietways routes, funded by TfL, are ideal for those new to cycling or that prefer to ride on quiet streets.

These routes are protected under measures that keep motor vehicles off of sections of the roads you ride.

Cllr Richard Livingstone said: “Walking and cycling are wonderful ways to stay healthy, and to fit exercise into your daily routine, while also helping to clean Southwark’s air.

“I hope Q14 will encourage more people to leave their cars at home and start taking short trips on foot or by bicycle.”

The Q14 route is planned to expand on to Canada Water and the borough boundary at South Dock in the coming years.

Quietways first launched in 2016 and has been adding routes throughout London ever since.

Sadiq Khan, Mayor of London, said: “Given the damaging impact toxic air has on our city, it is vital that we do all we can to enable more Londoners to cycle and reduce journeys by car.

“The latest figures show that Quietways are leading to a big increase in cycling with 24,000 bike journeys on Quietway 2 within its first week of opening.”

They have four more routes that are currently under development.