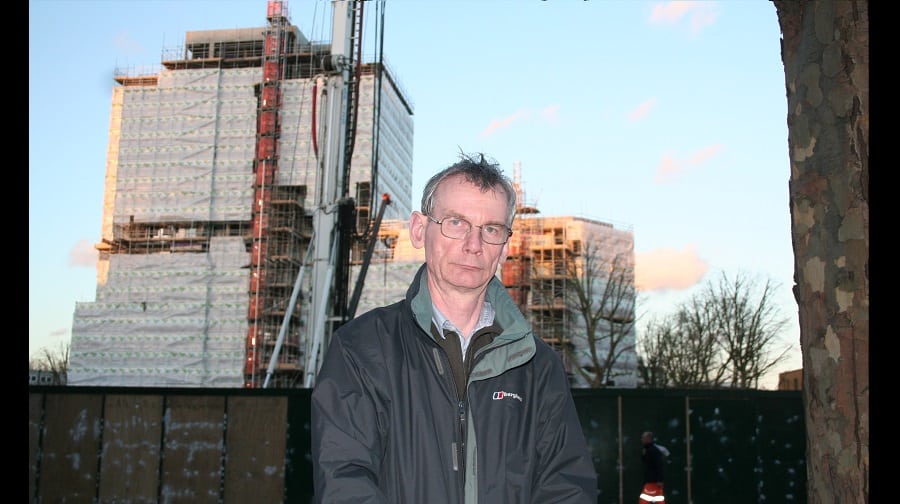 Jerry Flynn, from the 35% Campaign

A new development of flats on Peckham’s Woods Road and Tuke Street is the latest to attract the ire of housing activists, after documents revealed it only includes six homes for social rent.

The block of 122 new homes is on former council land redeveloped by Crest Nicholson after it purchased the site in 2013.

Southwark’s policy states developments should have 35 per cent affordable housing, of which 70 per cent is at social rent.

Responding to the tweet above, Cllr Johnson Situ, cabinet member for growth, development and planning, said: “Across the borough we know there is a need for three-bed family sized homes and we must to respond to that need.

“Whilst it is correct that only six of the homes would be at social rent what the campaign group don’t take into account is all six of these are three-bedroom homes, providing essential family-sized housing, and as affordable housing is measured by habitable rooms, not individual units, the larger homes do take up a larger share of the affordable percentage.

“In addition, the development provides wheelchair accessible housing and the affordable rents are capped at housing benefit levels, all of which means the development is compliant according to the wider planning policies for tenure split and affordable housing provision, all delivered by a housing association scheme that put profits back into housing for people.”

However, campaigners are against substituting social rent for ‘affordable rent’, with Jerry Flynn, on behalf of the 35% campaign, telling the News:  “To be getting only six social rented homes out of 122 units on what was public land is outrageous.

“According to Southwark’s housing policy we should have got twice the amount, but Southwark settled for bogus affordable rented housing, at up to 70 per cent market rent instead.

“Even this much would be a pitifully small amount – at least half of this scheme should have been social rented housing, at council rents.”