Bermondsey leaseholders forced to pay ‘£40,000 each for major works’ fear being slapped with another huge bill

“In the end the bill came to £42,000. All of our long-term retirement plans have gone out the window.” 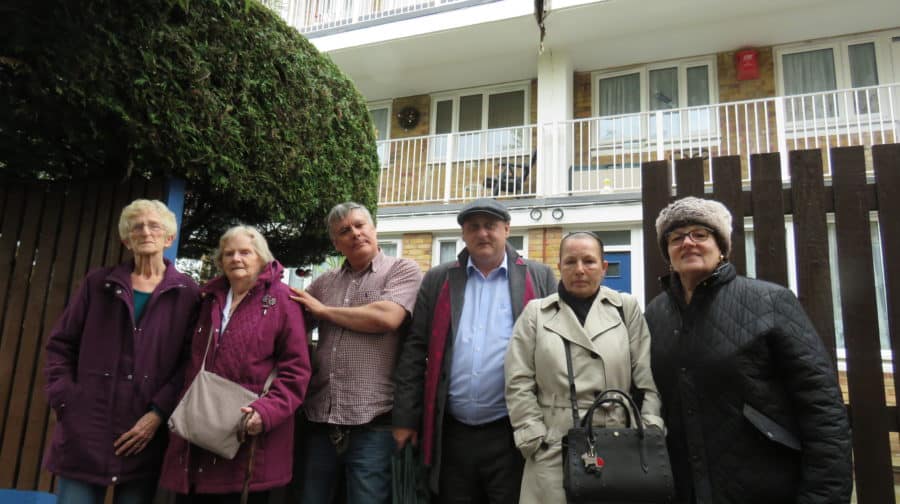 A group of leaseholders told the News they had paid up to £40,000 each for major works - and now fear being whacked with another major bill for emergency work

A group of Bermondsey leaseholders fear having to ‘double pay’ for emergency works on their estate, despite allegedly having already shelled out up to £40,000 each for major works.

Major works including new windows, railings and concrete took place on Lucey Way over 2016-17, hitting leaseholders with a hefty bill ranging from £29,000 to £40,000 each.

Now emergency works are being carried out to repair falling chunks of concrete from the estate’s railings and balconies eighteen months after leaseholders say they were installed and they paid the whopping bills to Southwark Council. The leaseholders are worried they will have to pay again.

A group of eight leaseholders told the News that they expect they will be served a Section 20 notice for the emergency works, but this has not been confirmed by the council.

The notice is a consultation that the council must serve for costs over £250. Leaseholders are required to pay towards costs calculated depending on work carried out and type of accommodation.

Southwark Council told the News it would be in contact with residents to “explain the current situation” and “any charges or billing to residents will also be thoroughly considered.”

It has previously said that if leaseholders did not pay the sums towards major works it would be forced to make up the shortfall by increasing rents on council tenants.

One Lucey Way leaseholder, Chris, who has been on the estate for 36 years and a leaseholder for the past twenty-eight, said the costs she had already paid have ruined her retirement plans.

She said: “In the end [the bill] it came to £42,000. I don’t know how they came up with that figure. I’ve paid more in major works than I even paid for the property in the first place.

“All of our long-term [retirement] plans have gone out the window.” The leaseholders say the emergency work for the falling chunks of concrete on Lucey Way should be considered part of the major works bill which they paid up to £40,000 each for

Leaseholders on Lucey Way, which forms part of the Lucey Way Estate, allege that the emergency works are fixing problems left over from the major works project.

But at a meeting on November 21, leaseholders said they were told the emergency works were a new project, leaving open the prospect of further charges.

The News contacted Keepmoat – the contractor which carried out the major works – for comment but did not receive a reply before publication.

Cllr Stephanie Cryan, cabinet member for housing management and modernisation, said: “Residents can be reassured that the council is looking into all aspects of the works to the Lucey Way estate and that any charges or billing to residents will also be thoroughly considered.

“We will be in close communication with residents in order to explain the current situation.”

“What often happens is the Labour council decides on its own what it thinks needs doing, without any real consultation or engagement with residents.

“It then lands a massive bill on the leaseholders for works that they either didn’t want or don’t think is necessary, and without trying to look for alternatives.”

It is not the first time local authority leasehold agreements have hit the headlines in Southwark.

Last year, the News reported leaseholders on the St Saviour’s Estate in Bermondsey successfully challenged the council after receiving bills of £17,000 for major work on their estate.

A band of 88 leaseholders banded together to take the council to a tribunal, which reduced the fees for the works to £8,000.

Southwark NewsNewsBermondsey leaseholders forced to pay ‘£40,000 each for major works’ fear being slapped with another huge bill