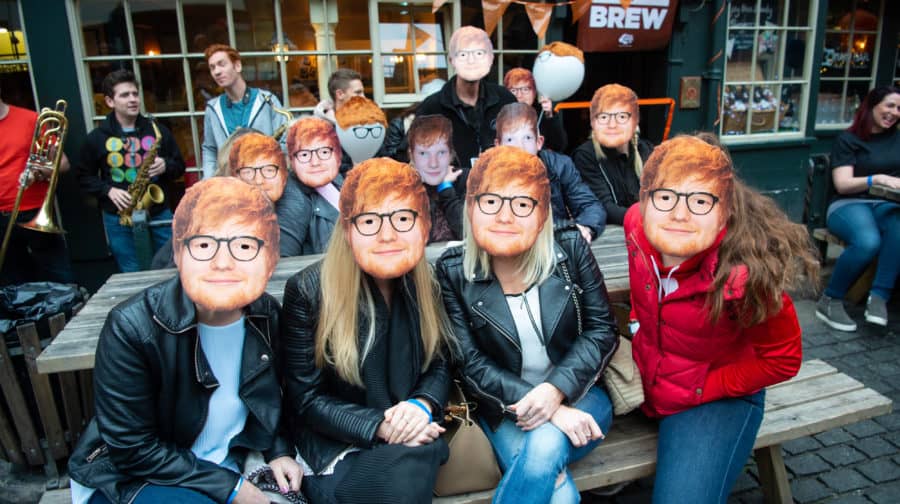 Ed Sheeran fans pictured in front of the Shape of Brew this morning (Image: Capital)

A historic Borough boozer changed its name for one day only today in honour of Ed Sheeran to the ‘Shape of Brew’.

The George Inn, on Borough High Street, took part in a stunt organised by Capital FM to name a pub after the famous singer-songwriter after the star hit headlines for naming a pub in his wife’s honour.

A brass band, an Ed Sheeran tribute act and even a poodle in a pink mini were all to be found at the Sheeran-themed event.

Capital Breakfast’s Roman Kemp told listeners of the radio station this morning: “Today’s the day we launch your pub – the pub you named, you created.

“It’s happening right now in London and it’s all – weirdly – in honour of Ed Sheeran. Get yourself down to the Shape of Brew today!” Someone even brought along their poodle in a pink mini

Yesterday footballing legend Harry Redknapp said he liked the idea so much that he would even donate some jam roly-polys to guests at the event – as he has just started up a jam roly-poly business.

The landlord of ‘The Shape of Brew’ Tom Flynn said: “It’s been a very, very odd Friday. I never thought I’d see balloons with ginger wigs or a poodle with ginger ears turning up in a pink Mini…

“Everyone’s in good spirits and we’re really enjoying it, it’s been a great day so far.”

However, there is no need to worry that the Ed Sheeran tribute name will stick for the historic boozer.

A spokesperson for the National Trust, which owns the property, said it could “assure all patrons and visitors” that it “has no plans to permanently change the name of London’s oldest galleried inn.”

“This short-term ‘name change’ was arranged by Greene King in collaboration with Capital FM and is not intended to remain afterwards,” added the spokesperson.