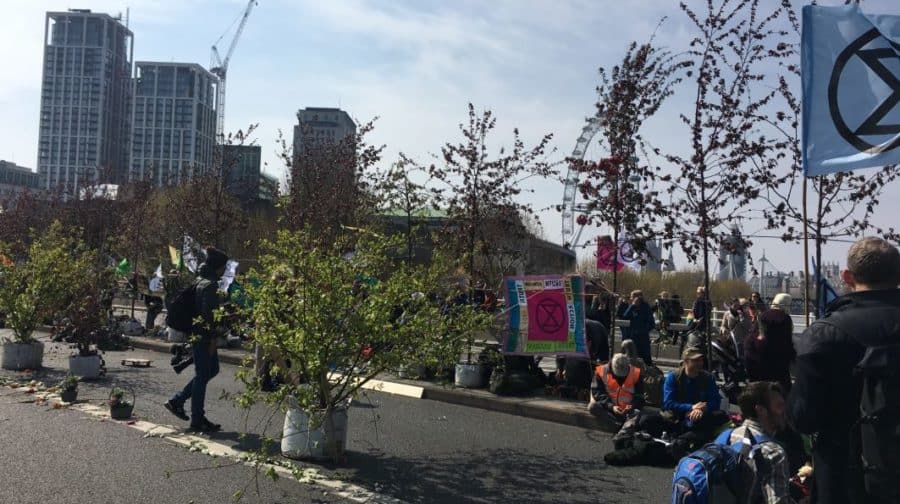 The disruption, which began on Monday, is “beyond unacceptable” and “putting a strain on the Met” with over 1,000 officers on the street throughout Thursday attempting to deal with the protesters, said Scotland Yard.

Officers warned protesters that their ongoing action meant officers were being diverted away from “their core local duties that help keep London safe”, having further implications in the coming weeks and months as overtime and leave were claimed back.

So far more than 460 protesters have been arrested, mostly for obstruction of highway offences, including on Waterloo Bridge.

A ‘Section 14 condition’ imposed by police means protesters are not legally allowed to demonstrate on Waterloo Bridge, Parliament Square and Oxford Circus.

However, many protesters have ignored the condition, leading to their arrest. Legal protest is allowed at Marble Arch.

The green group has vowed to continue with its action over the course of the week in a bid to force radical action on climate change.

In an escalation of tactics on Wednesday, several protesters glued themselves to a DLR train at Canary Wharf, while on Friday plans have been floated for a demo outside of Heathrow Airport by the group.

The action is not “a one-day march” its organisers have said – urging activists to “book two weeks off work, or go on strike.”

It is demanding that the government enact legally binding policies to go carbon neutral by 2025 and to establish a ‘Citizen’s Assembly’ to deal with the problem of climate change.

The demos have also seen criminal damage to Shell’s HQ on Beldevere Road, SE1, for which several protesters were earlier this week arrested.

In a statement explaining its tactics, the Met said it could not use containment as they had no legal basis for doing so.

“These are peaceful protesters; while disruptive their actions are not violent towards police, themselves or other members of the public,” the statement said.

“At this stage it is better for us to keep our resources and custody capacity moving and flexible than leave protesters sitting in cells for up to 12 hours before going to court for what, although highly disruptive, are lower level offences.

“So everyone else arrested has been released under investigation and will be brought back to be formally interviewed and charged as appropriate in due course.

“We are aware that means some protesters immediately return to the area to resume their activities; those people will be arrested again,” it added.