Bikestormz: Over 2,000 young people take to their bikes in stand against knife crime

The initiative was praised by rapper Stormzy, who explained it was the inspiration behind scenes in his music video for 'Vossi Bop' 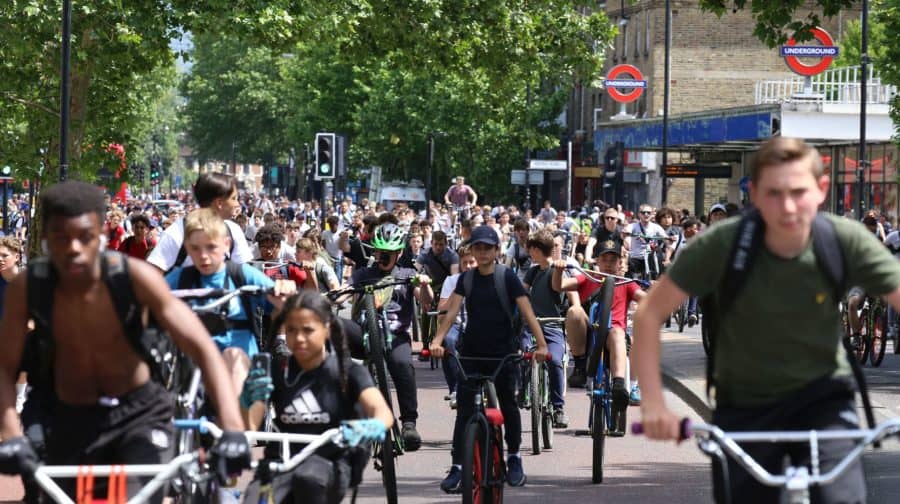 Some of the youngsters on the bike ride pictured along Bermondsey's Jamaica Road (Image: Bryan Jones)

Over two thousand young people took to their bikes in Bermondsey on Saturday to promote a message of ‘knives down, bikes up’.

The Bikestormz initiative, which saw riders leave from Southwark Park on a police-guided route, were praised by the popular grime artist Stormzy, who also attended.

The 25-year-old south London rapper praised the initiative to his two million followers on social networking site Instagram, saying: “I rolled up yesterday and saw the most beautiful and POWERFUL movement of youth, love and togetherness.

“There isn’t a single hint of conflict or negativity or violence just pure love and a bunch of kids having fun and enjoying themselves.” Over 2,000 young people took to their bikes in the event, which was praised by the popular rapper Stormzy (Image: Bryan Jones)

He paid tribute to the efforts of community activist Mac Ferrari, 35, who organised the event, calling him a “true, true legend” – and explained an earlier iteration of the ‘Knives Down, Bikes Up’ event had been the inspiration for bike scenes in his latest music video for the track ‘Vossi Bop’.

Ferarri has previously told the News: “We started it in order to bring young people together in harmony rather than in trouble.

“We wanted to bring them together and see if we could have a ride out where there’s no trouble and ride as one.”

The anti-knife event saw youngsters show off their bike skills in Southwark Park from 11am before leaving and cycling through Jamaica Road, St Thomas Street, and into Southwark Street. Southwark councillor, William Houngbo, who was involved in the event, said: “It was a great event and Bikestormz has enormous opportunities to offer young people, but it needs additional support – not just financial but also organisational.

“Younger people need to feel more included in society, and they need to hear positive messages from people they can relate to – especially on the issue of turning away from knife-crime.

The councillor, who represents London Bridge and West Bermondsey ward, added: “My thanks go to Mac Ferrari, to Chloe Newman from Southwark Young Advisers and to Sergeant Justin Hills for working with me and for making the event such a success.

“I hope we’ll see more such engagements in future.”

Southwark NewsNewsBikestormz: Over 2,000 young people take to their bikes in stand against knife crime