£2k raised to help Save the Footbridge Oaks campaign

The earliest the oaks could be felled is in September 2020 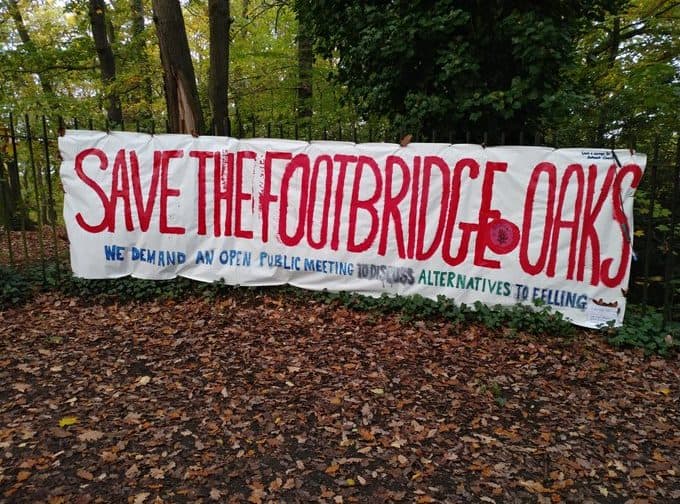 Tree campaigners have raised over £2,000 to pay for an independent engineer, to develop an alternate plan for Cox’s Walk Footbridge that saves its straddling oaks from being felled.

As this paper has reported previously, the Save the Footbridge Oaks Campaign has galvanised the support of environmentalists and many who regularly visit Sydenham Hill Wood and Dulwich Wood to protect the two ancient oaks in the conserved woodland.

They are lobbying against Southwark Council’s decision to cut down the two mature oaks on either side of the bridge which Tooley Street’s experts say needs structural work to keep safe.

The bridge was originally built in 1865 to cross the High Level Railway to Crystal Palace. More than 2,800 people signed a signature to save the trees which sit in an area of ancient woodland – one of the last remnants of the Great North Wood in London.

The Crowdfunder is paying for the engineer’s time, and it is hoped an alternative plan can be presented to the council when it is ready.

The earliest the oaks could be felled is in September 2020 after Southwark Council paused giving them the chop in favour of launching a public consultation.

The oaks are under threat once more. Please help us stop this unnecessary eco-vandalism. Southwark Council says it has no choice but to fell these beautiful, mature oak trees to carry out bridge repairs. We disagree. There is another way, we crowd funded an alternative repair plan which saves the trees. The Council have now shut down talks with us on this alternative proposal and plan to fell the trees w/c 16 Nov. Join with us to save the trees, sign the petition, email Catherine Rose, Cabinet Member for Environment, to voice your objections to the Council’s decision, join our whatsapp group, get involved. Thank you!
https://you.38degrees.org.uk/petitions/save-cox-s-walk-footbridge-oak-trees
catherine.rose@southwark.gov.uk

Southwark NewsNews£2k raised to help Save the Footbridge Oaks campaign