VIDEO – 56 Black Men: Started out in Peckham to highlight the importance of changing negative stereotypes

The panel included youth mentors, podcasters and campaigners, all working to 'change the narrative' about black men 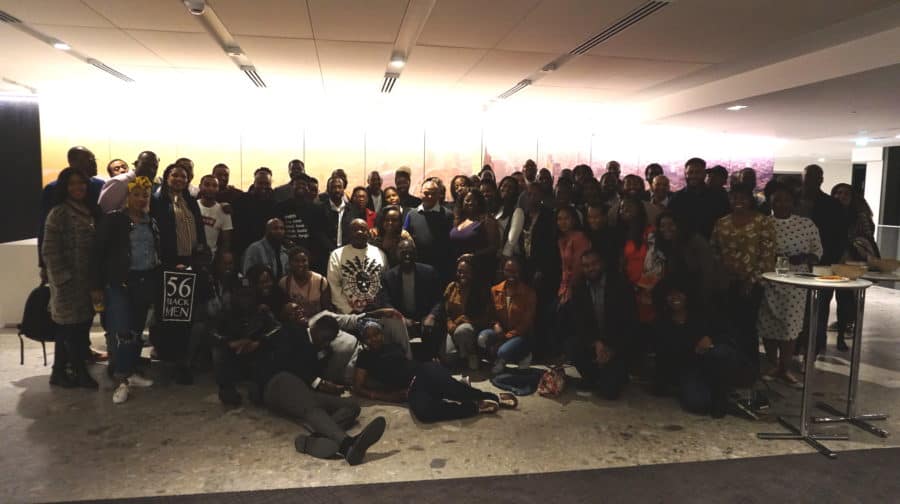 Audience and panelists pose together after the inspiring talk hosted by Schroders in Moorgate.

A panel discussion promoting positive black role models took place on on Father’s Day and was the first event organised by 56 Black Men, a campaign that started out at a Peckham studio, writes Josh Mellor…

The panel discussion at Schroders investment bank featured included podcasters, youth mentors and campaigners who spoke about the value of fatherhood, emotional intelligence and creating networks to support and empower each other.

Mr Madovi movingly explained what lead him to being part of a positive conversation: “My father died when I was three and I became a father at 18, at first I didn’t know what being a father was so I started the podcast to build a resource for black dads to learn these things.”

This was the first event organised by 56 Black Men, the national campaign to fight negative stereotypes that recently partnered with Clear Channel to display a series of 56 portrait photographs of professional black men – wearing hoodies.

One particular billboard celebrated on the campaign’s instagram channel showed the picture on the billboard above the bus station on Peckham High Street.

This is a movement that wants to spotlight abd create a platform for black men to finally take control of our own narrative. Shout out @clearchanneluk for getting behind the movement and believing in @cephaswilliamss vision / have a great weekend – #56BlackMen

The campaign’s founder Cephas Williams wants to offer a positive image of black men through their achievements as an alternative to frequent reports of them being victims or perpetrators of violence.

He chose the number 56 after reading a news report detailing how many black men were murdered in London in 2018.

Youth mentor King Cas, who hosted the father’s Day panel and is featured in the series, explained why he thought the campaign was important: “It’s amazing, not just because I’m in it, for young black boys to see those images and then to understand that this is not a negative story, not a sad story, not a death announcement. “These men who you’re seeing depicted here are people who are doing real positive things with their lives.

“They’re going through ups and downs just like everybody else but there are so many of us who are living positively and fighting through in the best possible way to make a better tomorrow for our stop ed meds.”

Mr Williams said: “I think it is about time we started to see black men, shown particularly in the media, in a positive light and where I didn’t feel that was changing I said I would do it myself.

“I believe more black men need to lead in their own conversation.

“I think that is one of the biggest achievements for me so far is that we are in a position now where black men can network, becoming more vocal, feeling empowered and leading on their own conversation.

Southwark NewsNewsVIDEO – 56 Black Men: Started out in Peckham to highlight the importance of changing negative stereotypes