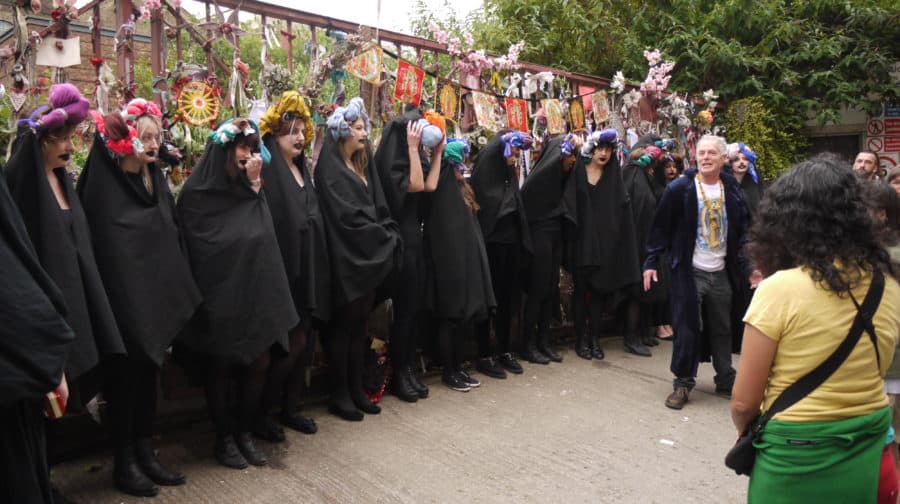 John Crow with Gaggle, the female choir, at a Crossbones vigil. Photo by Katy Nicholls

Midsummer, community and the life of MP Jo Cox will be celebrated at this month’s Crossbones Graveyard vigil this Sunday, 23rd June, writes Cara Cummings…

The shamanic-inspired ritual of remembrance will be the 181st held at the ancient paupers’ burial ground by the Friends of Crossbones group, who gather at the site each month to honour those buried there.

“An act of remembering the dead is also an act of affirming a living community, with a sense of connection,” says playwright John Constable, who leads Crossbones vigils. writes Cara Cummings…

“It’s a joyous way of interacting with a graveyard.”

The monthly rituals at Crossbones – where medieval sex workers were buried, according to local lore – often attract over a hundred people.

“It answers a gap that’s appeared in our society,” explains John.

“What we all share is a desire to connect; to feel that we’re not a dot that just disappears.

“We have lots of little miracles at Crossbones because of people not feeling so alone, because of just talking. That happening amongst strangers is extraordinary.”

Sunday’s event coincides with the Great Get Together, a nationwide celebration of kindness held in memory MP Jo Cox, who was murdered by a rightwing extremist in 2016.

“The murder of Jo Cox was an emblem of something we all have to consciously resist,” says John.

“We share the Great Get Together’s commitment to building diverse communities, where people from very different walks of life can get together and have fun.

“Anyone attending the Great Get Together is really welcome if they feel the call to come and honour the dead.”

Vigil attendees are encouraged to bring personal mementoes or ribbons to tie to the graveyard’s gates in honour of lost loved ones. The Friends of Crossbones will provide ribbons in the gingham design of the Great Get Together.

“That will be our moment when Jo will be remembered,” says John, “along with many others who’ve suffered from mindless violence.”

Participants should gather from 6.45pm at the street shrine on Redcross Way, where the vigil will begin at 7pm.