Neighbours kick up a stink over rowdy neighbour!

As Mr Johnson faces Jeremy Hunt in the battle to become the next prime Minister it might well be the residents of Camberwell that stop him from sailing to victory. 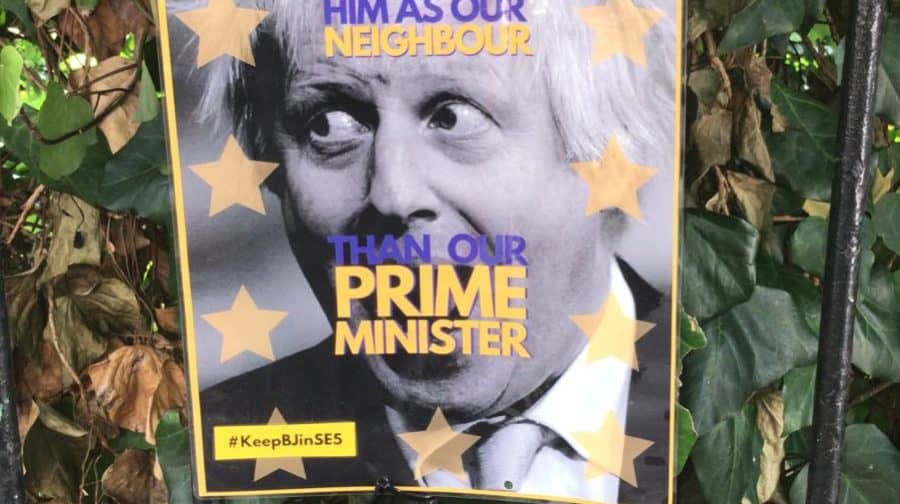 Speculation that PM-hopeful Boris Johnson is sharing a flat in Camberwell with his young girlfriend have been dramatically exposed, as the national press reports on a bust-up between the pair and now posters are being left  in the area proclaiming: ‘We’d rather endure him as our neighbour than our Prime Minister.’

The apparent argument just after midnight in the early hours of yesterday morning (Friday June 21) was reported to The Guardian newspaper by a neighbour, who is said to have recorded it on a smartphone.

This was just hours after another landslide ballot victory for the 55-year-old former Foreign Secretary.

As Mr Johnson faces Jeremy Hunt in the battle to become the next prime Minister it might well be the residents of Camberwell that stop him from sailing to victory. The posters even have a hashtag #KeepBJinSE5

The ‘blazing row’ and ‘proper tear-up’ as reportedly described by the neighbours will draw attention to the personal life of the Tory leadership favourite, who already has two divorces and a ‘lovechild’. The Southwark News diarist speculated nine days ago that Boris could be living in Camberwell, but avoided disclosing where.

Now all the national press are camped out on the doorstep.  Neighbours interviewed claimed that Miss Symonds was shouting “get off me, get out of my flat” and Boris shouting back ‘get off my f***ing laptop’ before a loud crashing noise was heard and police called.

It has been reported that he may seek an injunction to suppress any attempt to release the recording.

However, attempts to stand by Boris from his allies in the party have not gone down so well, so far. The Mail Online reported:

“Security Minister Ben Wallace, a close ally of Mr Johnson, came out in his defence before deleting the tweet, which read: ‘What a non story, ”couple have a row”. Lefty neighbours give recording to Guardian. Newspaper reaches new low is a better news story.’

The Guardian said that when they contacted police they initially said they had no record of a domestic incident at the address. But when given the case number and reference number, as well as identification markings of the vehicles that were called out, police issued a statement confirming they were called to Miss Symonds’ flat at 00:24am and spoke to all the occupants of the address, ‘who were safe and well’.

Southwark NewsNewsNeighbours kick up a stink over rowdy neighbour!