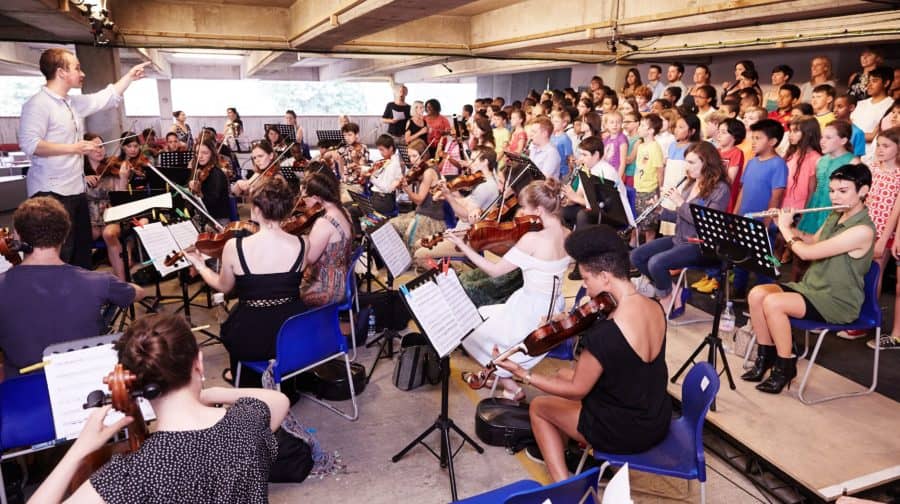 A classical orchestra in a multi-story car park and professional musicians next to young south Londoners. What could go wrong? writes Josh Mellor…

Fifty children from Walworth’s Pembroke Academy of Music will play with an orchestra of professional musicians who want to spread their appreciation of quality classical music.

The Multi-Story Orchestra’s July 20 performance promises to contrast short baroque and renaissance musical pieces with the brutality of a modern concrete car park while combining youthful enthusiasm with professional experience.

The orchestra’s composer Kate Whitley said: “It’s a challenging piece for them but so nice how much they have risen to the challenge, experiencing their enthusiasm and energy is such a dream.

“The adults love it because the kids are so nice, when you’re professional you can’t do that kind of thing everyday, passing on to the next generation is just as valuable to them as for the kids.” Ms Whitley also promised a big rowdy crowd and a family friendly atmosphere to add to the cool contrast.

The Multi-Story Orchestra was set up in 2011 by Ms Whitley and co-founder Christopher Stark who also perform in a car park in Gloucester and with a youth choir in East-Riding, Yorkshire.

Bold Tendencies cultural centre, in a converted Peckham car park, will reverberate with Multi-Story’s sounds on Saturday 20 July at 7pm.

Tickets are available at: https://billetto.co.uk/e/the-multi-story-orchestra-rameau-and-byrd-tickets-352278