Over 650 local residents have signed an online change.org petition to have the pub reinstated 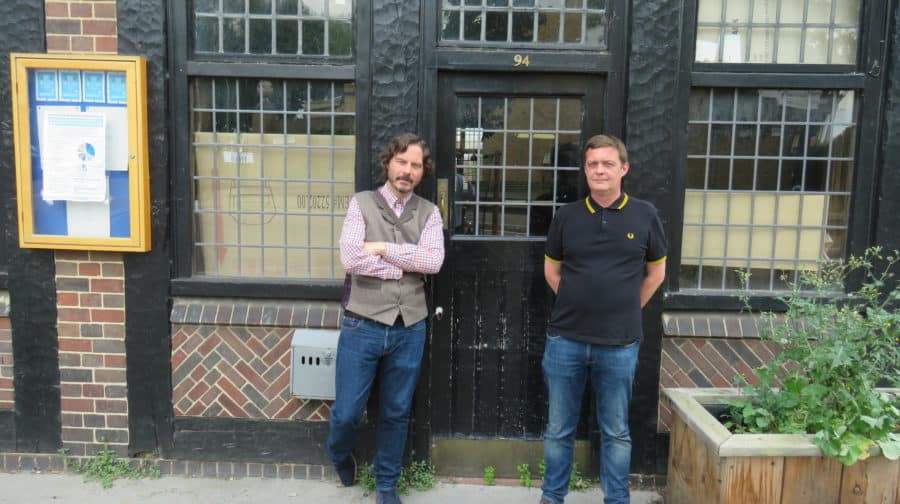 A former Bermondsey boozer which was the backdrop to an iconic Sir Paul McCartney music video may open again as a community-owned co-operative pub, if a new campaign is successful.

The Grade II-listed former Old Justice pub on Bermondsey Wall East was given a reprieve from being turned into flats in late 2017, after it was closed.

The ‘Tudorbethan-style’ pub, first built in 1933, is currently lying out of use.

A bid to re-open the pub, dubbed ‘No More Lonely Nights’ after the Macca music video its interior featured in, is being led by locals Richard O’Shea and Darren Chandler.

“I think my first-ever pub bought pint was in the Old Justice,” said Richard, a 45-year-old carpenter by trade, living near Surrey Quays.

“We both grew up with a local pub. And when a pub shuts down, all the older members end up getting split up and they end up sitting inside instead.” “Not one person we’ve spoken to wants this turned into flats,” added Darren, a 47-year-old book-keeper from Walworth.

“We’re the people to get it back up-and-running.

And if we can get it back up-and-running, there will be something for everyone.”

Among the steps planned to bring the pub back to life is to get it registered as an asset of community value (ACV).

The status if approved means that were the pub lease to be sold, the community would have the first right-of-refusal on buying the lease.

ACVs require 21 signatures from separate households – but the campaigners have so far managed to get over 100.

Richard and Darren have been aided in their efforts by ward councillors, who support the bid to turn the much-loved pub back into a community-led boozer.

“Liberal Democrat Councillors blocked the planning application to turn the pub into posh flats and are now delighted to be working with local residents to bring it back into use as a community pub,” said Anood Al-Samerai, one of the councillors for North Bermondsey.

“It is very early days in the campaign and there is a lot of work to do, but we are already being inundated with offers of help and support.” The Grade II listed boozer was the backdrop to the Sir Paul McCartney hit, No More Lonely Nights

Around a year ago, ‘very fine’ wooden panelling from inside the listed building was removed, sparking an enforcement notice by the council and outcry from the local community.

But the notice was appealed, meaning it now will go to a public inquiry later this year.

“We can confirm the planning inspectorate has now started the appeal against the council’s enforcement notice, following a year of inaction, and we hope to have a public enquiry this autumn,” Cllr Johnson Situ, who holds the cabinet’s planning portfolio, said.

“The council began this enforcement action after the removal of the very fine, listed interior wood panelling.”

Cllr Situ added: “We have been approached by the campaigners and we are aware of their hopes to take on and restore the pub.

“We value the role local pubs play for residents across the borough, so will offer what advice and support we can, but in the meantime we await the decision of the planning inspectorate.”

The News could not find contact details for Hamna Wakaf Ltd, which owns the freehold of the site, to ask them for their comment.

The campaigners will be registering as ‘people of interest’ for the public inquiry, and have also set up an online petition demanding the pub be ‘saved’ and re-opened, which has garnered over 650 signatures.

The petition will ‘give weight’ to the attempt to get the pub listed as an Asset of Community Value, Darren said.

Nearby China Hall, on Rotherhithe’s Lower Road, closed its doors in January, following a long-running battle between its landlords and Hamna Wakaf.

Plans by the developer were submitted to the council to expand the ACV-listed pub building to include four flats.

However, the council refused planning permission for the flats at the end of last month.

The campaign’s social media details can be found on Facebook here, while the online petition can be signed here.