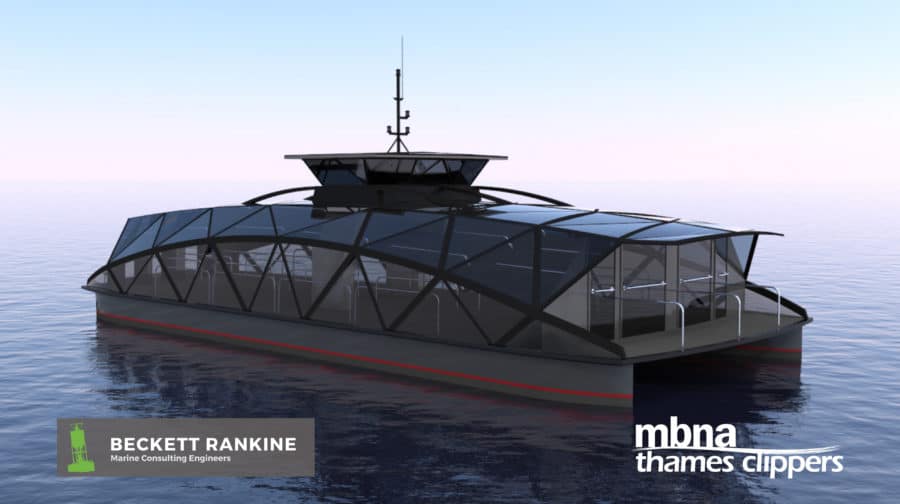 An artist's impression of the ferry

A UK first zero-emissions ferry option has been proposed for the Rotherhithe to Canary Wharf crossing after TfL shelved the planned bridge over escalating cost.

The proposal from Thames Clippers, which currently runs the ferry service between Canary Wharf pier and Doubletree Docklands hotel in Rotherhithe, would see three boats running concurrently said the firm.

The idea would meet demand predictions, Thames Clippers has also said, offering a 2,250 capacity per hour in each direction.

However exact details of the transport solution for the river crossing has not yet been confirmed by TfL or the Mayor.

A backlash was sparked after TfL decided to cancel the Rotherhithe Bridge last month, saying it was “currently unaffordable.”

Council leader Peter John called on the decision to be reconsidered, as did Rotherhithe’s three Labour ward councillors.

But the opposition Liberal Democrat transport spokesman Cllr Damian O’Brien slammed it as “Labour’s Garden Bridge fiasco”, arguing it showed the party could not be trusted on transport in Southwark.

I would argue that a ferry is in no way a replacement for a bridge, which is why TfL selected a bridge in the first place. We should be looking at ways to get the bridge cost down rather than look at an inferior alternative.

Disadvantages of a ferry compared with a bridge:

Whereas 95% of all river traffic would pass under a bridge without it opening, a frequent ferry service will be in frequent conflict with river traffic causing delays, disruption and safety concerns

We understand that under current proposals we would have to pay a fare for the ferry. The current ferry is probably the most expensive in the UK if not the world (per m travelled for pedestrian/cycle use) at a standard fare of £9.60 return which I for one consider to be utterly unacceptable. The bridge was planned to be free of charge, like any other bridge in central London

Potential for interruption of service at low tide, in adverse weather and potential strike action

The huge tidal range of the river will require very long ramps for cyclists – we believe up to 200m in length – to ensure the slope doesn’t exceed safe limits for cyclists and passengers of all abilities. We don’t know where these will be located, but it is possible the impact on the surrounding areas on either side may not be much different than for the bridge.

Recent reports suggest that it is proposed to have two ferry berths at Nelsons Dock, adjacent to the Doubletree Hotel. We are unclear how cyclists or the ramp will be accommodated at this location. Cyclists currently wheel their bikes through the Hotel lobby.

Are low emissions/electric ferries really feasible? Given that they will be in constant use, how will they be recharged and is the required technology currently available? The alternative of three large diesel engines constantly operating at this location is not an attractive prospect.

But a bridge would be free to cross and this would not be. This is not a valid solution! Just another money making scheme.

The proposal has merit BUT the cost to cross presently is very prohibitive which puts most locals in rotherhithe off using it.
If Thames clipper would agree to make it “public transport costs” then it could be viable…..

I really don’t understand why the price forecast is that high for the bridge went to £600m.
I am just back from Bordeaux in France, where was inaugurated in 2013 the highest lift bridge in Europe. The bridge is 575m (1886ft) long, 77m (253ft) high, with a 110 m (361 ft) main span. It is used for cars (43,000 a day), lorries, cycles and pedestrians, so the technical specifications are much more complex than for the Rotherhithe bridge. Yet, the cost for this bridge was ‘only’ €157m (£145m). I understand costs may be slightly higher in London but this is still a £455m difference, for a smaller/easier bridge. Here is a link to an English description of the bridge in Bordeaux: https://www.bordeaux-tourism.co.uk/offre/fiche/pont-jacques-chaban-delmas/PCUAQU033V500O5B