Grieving mum Cindy Hughes says she hopes Nyron Baptiste will be ‘truly rehabilitated and return to society as a better person’ and that when he has children of his own he will ‘understand the devastating impact’ of his actions. 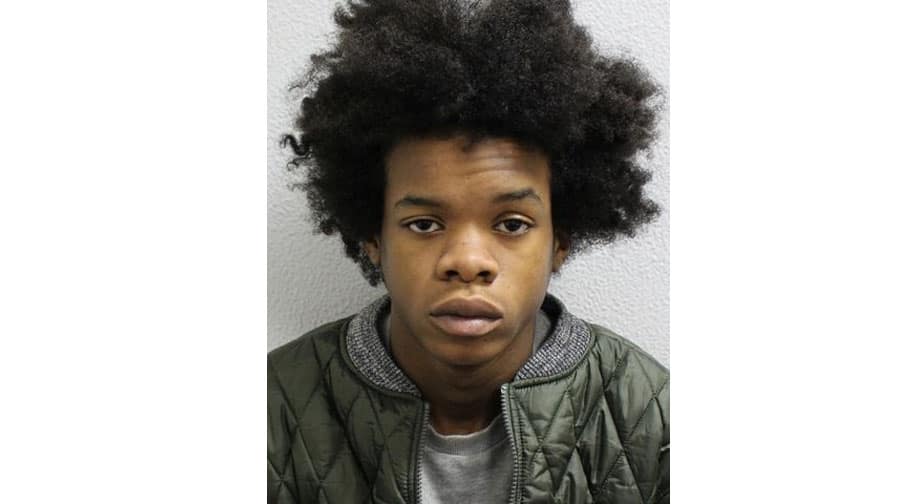 A south London teenager that murdered fifteen-year-old Jay Hughes was sentenced today (August 2) to life and told he must serve a minimum of nineteen years behind bars.

Nyron Baptiste, 18, of Penge had been was found guilty of Jay’s murder on 20 July. He had not previously been named due to his age, but as Baptiste has now turned eighteen police released details of his sentencing at the Old Bailey.

The court was told that Jay Hughes was waiting for a friend outside a chicken shop when he was randomly attacked and fatally injured on November 1 last year on Randlesdown Road, Bellingham.

An immediate investigation was begun by detectives from the Homicide and Specialist Crime Command.

CCTV from the chicken shop captured the car used by the defendant; this was located on Linden Grove in Nunhead, on Monday, 5 November.

The court heard how forensic analysis found Jay’s blood present in the back seat of the vehicle.

And further evidence was obtained, that linked the defendant’s movements with the movements of the car.

On Friday, 23 November officers visited the Baptiste’s address in Penge to carry out an arrest, but he had fled the area. Following enquires he was later arrested in Gravesend, Kent, on Monday, 10 December, after an officer recognised him as he walked along the street.

Police said that on arrest, a large hunting knife was found in the waistband of his trousers and he was further arrested for possession of a bladed article.

He was remanded into custody and later charged.

The Judge in her sentencing remarks stated that she was in no doubt that the “brazen, quick and ruthless attack” was planned and that Nyron Baptiste had intended to kill the victim.

The court was told that while he waited for a friend outside a chicken shop, a young man he knew approached and began to speak to him. During the conversation, a black Ford Galaxy pulled up to the junction of Brookhowse Road with Randlesdown Road.

Three males, armed with large machete type knives, got out of the car and ran towards Jay and his acquaintance.

The person Jay was talking to ran off and was pursued by two of the armed males.

However Jay did not run and CCTV showed him innocently waiting outside the shop. It was at this point that the court heard how the defendant approached Jay and proceeded to stab him once in the left hand side of his upper body.

A witness later told police they heard the person who stabbed Jay say, “I got one” and that Jay did not say or do anything to provoke the attack. After stabbing Jay, the suspect ran back towards to vehicle.

The court heard that the other two armed suspects who had chased, but not caught, the other boy then ran back to the car, which reversed and drove off at speed.

After being stabbed, Jay staggered into the chicken shop, where customers began first aid.

Emergency services were alerted at 5.22pm and on arrival paramedics worked frantically to save Jay’s life. He was taken to Kings College Hospital, however the stab wound had pierced Jay’s heart and despite every effort he was pronounced dead at 8.15pm.

A post-mortem examination held at Greenwich Mortuary on Sunday, 4 November, gave the cause of death was given as a single stab wound to the heart.

In her victim impact statement released after the sentencing Jay’s mother, Cindy Hughes said that her hope for Nyron Baptiste was that he could be ‘truly rehabilitated and return to society as a better person’ and that when he has children of his own he would ‘understand the devastating impact’ of his actions.

She said: “Jai [sic] was my first son and was very special to me.

“I was proud of the young man he was becoming and proud to call him my son.

“I loved his zest for life, his confidence, his positivity, his fantastic sense of humour his constant smile and most of all his kind heart.

“We shared some great times together joking and laughing as he reminded me so much, of myself at his age. He was just a normal teenager but was always respectful, which was a quality he also tried to instil in his younger brothers.”

She continued: “I have so many special memories of Jai.”

“Even from a baby, he always had something in his mouth. From a dummy as a baby to bottles of drink, straws – even held his headphones in his mouth. He loved playing with his toys, especially his Ben 10. I remember teaching him to ride a bike, so well. He persisted until he could do it and never got off the rest of his life. He went everywhere on it. Even one of his teacher’s eulogy referred to “that blessed bike!”

Speaking of her anguish she said: “During the last nine months I have been through, and am still going through a range of emotions – shock, devastation, confusion, anger, denial. I am so empty and sad inside it is heart-wrenching. It is like a part of me has died as well.

“Nyron Jean Baptise, you need to realise that you have changed our lives forever and that we are the ones left serving a life sentence.

“My only hope for you is that you can be truly rehabilitated and return to society as a better person.

“One day if you have children of your own, you may begin to understand the devastating impact your actions had on the lives of so many people.”

Jay’s grandmother Sophia Sewell agreed with Jay’s mother’s statement, adding: “There’s a lot I want to say to the defendant, but wouldn’t be suitable, however I’d like to say to Nyron Jean Baptise. This was unacceptable and you will no doubt be in prison for a long time.

“I hope you use some of that time to reflect on the pain that you’ve caused my whole family.

“Maybe when you have children you might understand and regret that you took an innocent life and for what? Why?

“We ourselves will never understand and we will always be grieving.”

However, speaking after the sentencing Detective Sergeant Anthony Atkin, who works in Homicide part of Specialist Crime said that Nyron Baptiste show ‘no remorse’:

“Jay Hughes was just a fifteen-year-old boy who was simply buying food and waiting for a friend to spend the evening at a youth club; this could have been anyone’s child that evening.,” he began.

“What Jay did not know, was that at that moment Nyron Jean-Baptiste had armed himself with a large knife and set out with others intent on violence.

“CCTV captured the moments as Nyron arrived in a car. Jay was standing outside the shop with another, who was chased off. Nyron approached a defenceless Jay who had not provoked or sought to flee. I doubt that Jay truly understood what was about to happen.”

Adding: “Nyron indiscriminately stabbed Jay in the chest piercing his heart and then boasted that he had ‘got one’ as he ran back to the car. I am at a loss to understand how anyone could carry out such a wickedly despicable act.

“Nyron was identified and eventually tracked down and arrested. Even after all the horror he inflicted with a weapon, a large hunting knife was found in the waistband of his trousers on arrest.

“Throughout the trial Nyron denied his involvement, claiming he did not know where he was that day.

“The jury, after careful consideration of the evidence saw through this and found him guilty of this heinous act.

“Today at sentencing, as he has done throughout the investigation and trial, Nyron has shown no remorse.

“He now has a minimum of nineteen years to reflect on what he has done and the pain and suffering he has inflicted on Jay, his family, his friends and all those who witnessed this brutal act.”

He said: “My heart goes out to Jay’s family who are obviously devastated by the loss of their precious young child.

“I can only hope that the sentenced passed today will help in some small way.”

And finished by praising those that came to Jay aid: “Lastly I would also like thank those people who came to Jay’s aid and those who came forward and assisted the investigation.

“Many people came to help that night and it is important that when wickedness has been done, the good that lies within a community is not forgotten.”