Surrey Quays: Rescued baby swan will make full recovery – and has even made new friends 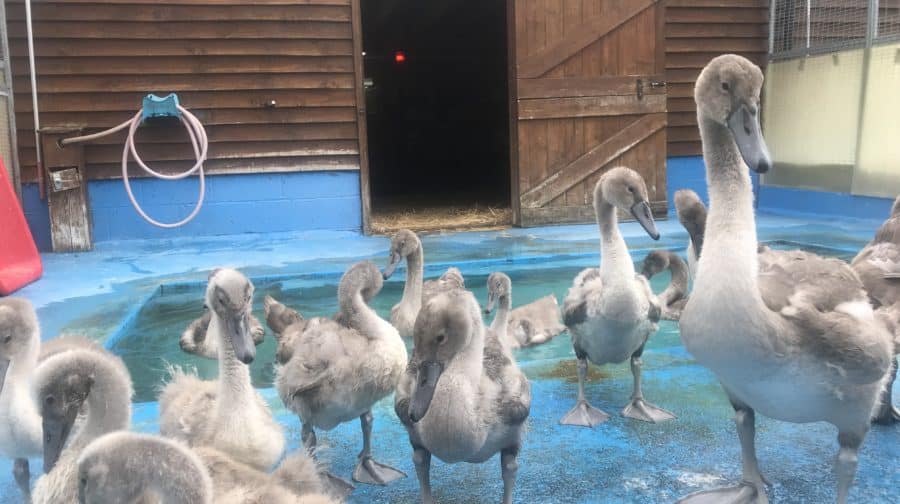 A baby swan which was rescued from Surrey Quays after getting its leg caught in fishing wire is expected to make a full recovery – and has even made new friends.

A Swan Sanctuary volunteer and the Fire Brigade worked together to free the ‘distressed’ cygnet last month, which would not have lasted long without their efforts because of its swollen leg.

The Fire Brigade used a water rescue boat to free the swan, as it was trapped in deep water, before it was handed over to the care of the charity. Now despite a bit of a limp, the creature is said to be doing ‘very well’ – as well as making new pals with other cygnets.

“He’s going really well!” said Gemma, a volunteer with the family-run charity. “He’s got a bit of a limp, but we expect him to make a full recovery.

“We put all of those of a similar sort of age together so that they can form a close friendship group.

“So they’ve got someone they’ve known for a long time when they’re released into a nearby flock.” He sadly could not be returned to his mother, despite only being born in May, as she will reject him – but will be released into the new flock with his friends in a couple of months.

Ian Barritt, who managed the fire brigade crew at the scene last month, said that calling the RSPCA is the best thing to do first if a trapped swan is seen, but that the fire brigade is happy to attend if specialist equipment is needed.

It comes after a baby fox was rescued in Rotherhithe station by a concerned passer-by last month.

The cub, dubbed Sandy by her rescuers, was released into the wild at nearby Russia Dock Woodlands.

Southwark NewsNewsSurrey Quays: Rescued baby swan will make full recovery – and has even made new friends