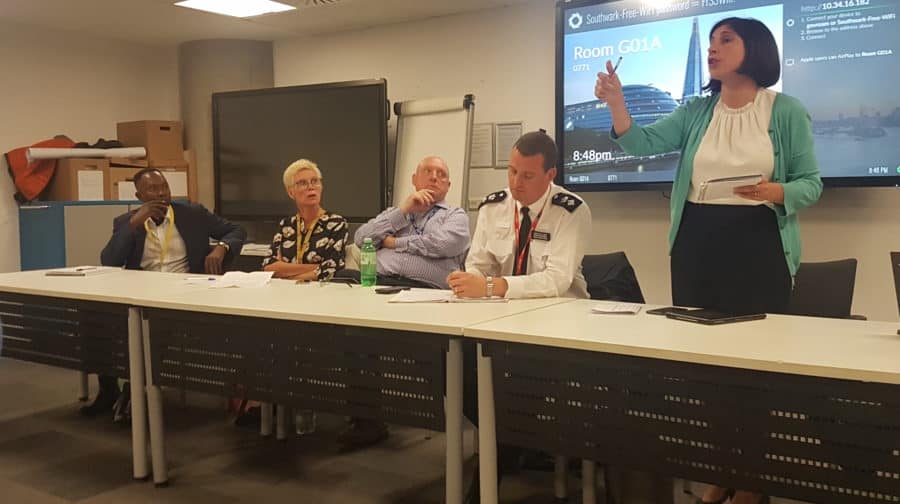 Bermondsey residents spoke of their deep concerns at antisocial behaviour from large groups of ‘boys on bikes’ at a crowded, lively and sometimes angry meeting on Tuesday night organised by local councillors.

Around 100 people filled out a room in the council’s Tooley Street headquarters to share their experiences of bikers’ behaviour with police top brass and council officers  – with some telling officials they felt parks had become ‘no-go areas’ for their children as a result.

One resident, who did not give his name, said he had been living in the area for 38 years, but had noticed a particular increase in antisocial behaviour and crime from ‘boys on bikes’ in the past two years.

Another added he had been attacked by a child on a bike, who then allegedly threw a brick through his window, costing him £1,000 in repairs.

Many in attendance were keen to stress the problem was being caused by a minority of young people – a point reinforced by one youngster, David, who volunteered to meet with police to discuss solutions.

Borough commander, Ch Supt Simon Messinger, Southwark and Lambeth’s top cop, told residents that the issue was being caused by a ‘hard-core group who are spoiling it for the rest.’

“Some of the young people are not from Southwark, they are coming from other London boroughs, it’s not just a Southwark issue,” he said.

“Some of the kids are filming it and then putting it on social media, which is how these trends grow.”

Responding to concern raised of areas not being safe he added: “The idea that we could have ‘no-go areas’, that’s unacceptable for me as a borough commander.” The operations will then be reviewed after six weeks, residents were told, while a follow-up meeting is planned to discuss long-term solutions with community groups, such as more youth spaces or a dedicated bike track.

Among the difficulties in tackling the problem, officers said, were large groups of individuals made it hard to identify those responsible, while instant messaging allowed problematic bikers to disperse before police arrived.

Mr Ferrari said Bikestormz, which had been praised by rapper Stormzy as the inspiration by his music video for ‘Vossi Bop’, had been cancelled for the foreseeable future, over residents’ concerns around young bikers.

Cllr Anood Al-Samerai, the Liberal Democrat councillor who called the meeting alongside her colleagues in North Bermondsey and London Bridge and West Bermondsey wards, said she was ‘pleased’ that police had pledged more patrols in the next six weeks.

“We will be monitoring that very closely,” she told the News. “We also want the council to explore a space for the bikers.

“The answer is having more police offices and working with the community to find solutions.”