£400,000 refurb for Tooley Street boozer will see it re-open as The Two Bridges 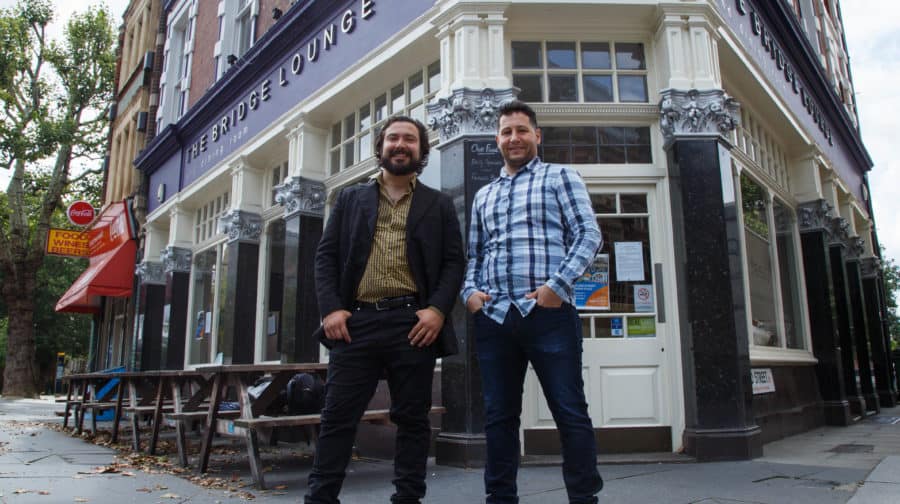 A £400,000 refurb at The Bridge Lounge on Tooley Street will see the boozer re-open in mid-September under a new name.

The overhaul, which began on August 5, will see the pub become The Two Bridges, alongside a new bar being installed, a 72inch TV and an eighty-person seating area to cater for more private functions.

New Yorkers Joseph ‘Felix’ Marcuccio and Elliot Swift will be taking on the pub alongside their partners, both of whom will live above the pub. Seven new jobs will be created by the refurb.

“We both have worked in hospitality in New York and Elliot has worked in number of pubs in London including most recently managing a pub in New Cross,” said Felix.

“I’ve lived in nearby Shadwell for the last two years and so am familiar with the neighbourhood and the pub.  So when the opportunity to take on The Two Bridges came up, we leapt at the chance.” Impression of how the refurbished boozer will look

The publicans pledge that the refurb will see The Two Bridges have a further fifty seats downstairs for casual dining and a large video wall to allow them to show sports for the first time.

“We’re really excited to be running a traditional old-style pub in such as fantastic are and to be moving to the area,” added Felix.

“ We want to become part of the community, get involved in local events and following the refurbishment make the pub a home from home where people from all different backgrounds and ages can come together.”

The boozer, which will be open daily, aims to serve ‘premium and craft beers and ciders’ alongside ‘good quality pub classics’ like fish and chips, burgers and salads.

“The Two Bridges is just 250 meters from Tower Bridge and the closest pub to City Hall and so is in a fantastic location to capitalise on tourism, trade from local businesses and nearby residents,” added Dugald Macer, Star Pubs & Bars Regional Operations Director, which is Heineken’s pubs arm.

You may want to follow up on this story as Felix is now standing outside the bar with a placard stating how was unfairly removed from service.
He or his wife and their 3 month old daughter are out side on a daily basis

Southwark NewsNews£400,000 refurb for Tooley Street boozer will see it re-open as The Two Bridges