All You Knead to Make Art For Bermondsey Square

Artist continues her inquiry into technology’s relationship to our everyday environments. 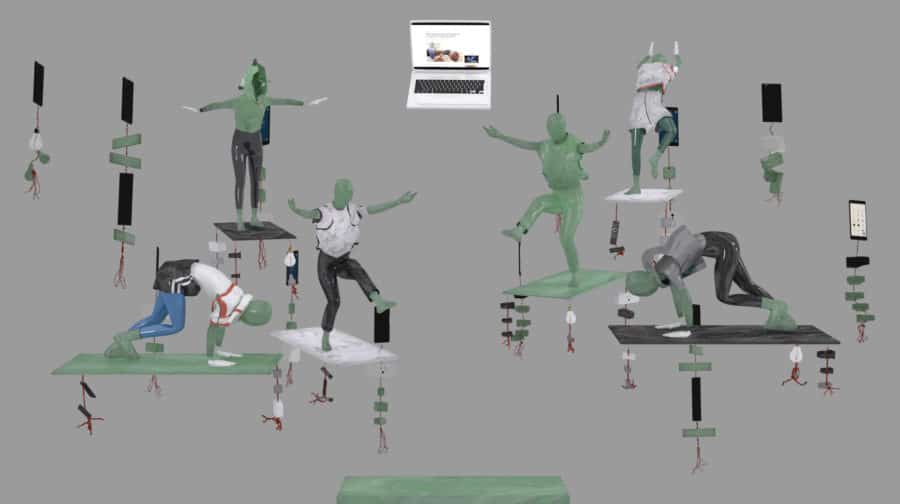 ‘You Will Knead’ is British-Singaporean artist Kara Chin’s first solo project with the gallery and is realised across two sites: VITRINE, London and VITRINE, Digital. The artist presents a new body of work that reflects on coping mechanisms used over periods of lockdown in 2020, continuing her inquiry into technology’s relationship to our everyday environments.

Working across animation, sculpture, and installation, Chin’s work merges the online and digital with the physical world, observing our relationship to the devices we regularly use in humorous and fantastical ways. Chin considers the implications of widely used technologies and their resulting ethical conundrums, working with a variety of natural and synthetic materials to develop a unique combined style of mosaics and figurative elements. Her chaotic installations bring together these elements often combining kinetic and robotic components. 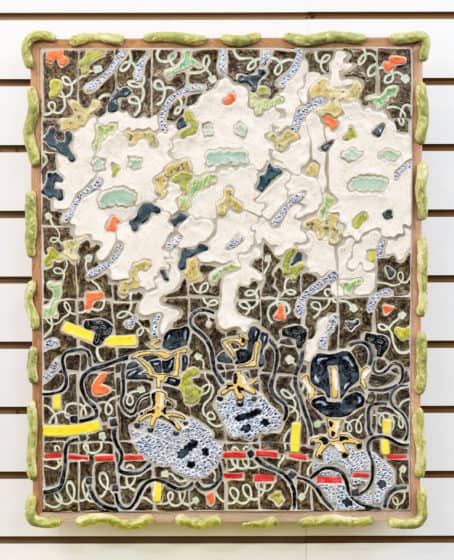 Your Chairs Letting Off Steam

After reading the article ’Baking and The Sims helped Little Mix in Lockdown’, and seeing those close to the artist participate in the same activities, Chin became interested in the resulting worlds they created for themselves. Within ‘Sims 4’, digital dream houses are created in which to regress and find comfort, offering a sense of control by living vicariously through screens in contrast to a precarious real-world. Bread baking is a historically significant activity, as a produced food at low cost, and is eaten by people in all levels of society. More recently it has been associated with a form of mindfulness and therapy as its process requires tenderness and care. The recent resurgence in home baking resulted in shortages of flour and yeast in the UK.

For her new work in ‘You Will Knead’, Chin uses salt dough as a durable and natural yet long-lasting material to make mosaics similar to her previous work in ceramics and perspex. Her removal of its edible function reconsiders the material as a precious object, therefore necessary to preserve.

In the centre of the mosaics are small dioramas of shops and houses full of supposed flour containers, which the artist considers as “little utopias with an abundance of flour”, similar to creating “dream houses” in ‘Sims 4’. Browsing online stores such as eBay during 2020, Chin became interested in listed items being photographed next to mundane objects ‘for scale’, such as soapstone sculptures placed next to a can of coke. She also explored the many examples of peculiar scale being used in agricultural and craft practices, including giant vegetables and a knitted miniature version of the Nightingale Hospital. Chin considers these juxtapositions an example of scale being lost online and, as our activities are increasingly moved online, our experiences are thus being scaled down to screen sizes. A diorama shifts scale in a strange and unsettling way, condensing our lived experience of the world.

In the gallery space at VITRINE, London, Chin creates a DIY installation to combine these mixed-media works with new animated sculptures presented on tiny Raspberry Pi computers, playing with the notion of a vitrine as a place of retail and display, viewable 24/7 from the public square and neighbouring a Sainsbury’s Local. Concurrently in the online space, at VITRINE, Digital, Chin creates digital dioramas and reproductions of elements from the physical installation; continuing her investigations through 3-D digital renders and animations. This is also viewable 24/7, from any computer screen.

In a period of much uncertainty and restrictive movement, the exhibition offers the viewer, locally and internationally, a look into Chin’s haunting digital and physical world in miniature. A place where lived experiences are played out in isolated imagined scenarios.

Southwark NewsNewsAll You Knead to Make Art For Bermondsey Square