Winners of the Rock Shock – Battle of the Bands competition 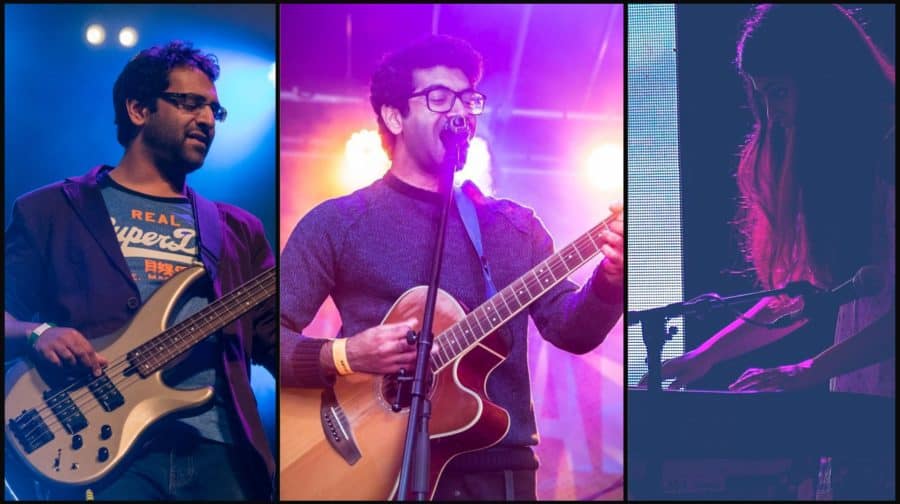 Side Partition is an 8-piece collective from South Asia based in different parts of London. They consist of vocalists, drummer, bassist, guitarists and keyboardists who have influences from Jazz to Hindustani and from Rahman to Mozart.

They combine all these genres and influences to create something new and fresh.

The band was formed by the two brothers, Ranit and Rajit Shail, and their close friend Shouvik Ghoshal with a little push from their father Ranjit Shail.

They started by performing at family gatherings and making YouTube videos. During their time at university they began performing for a bigger audience and also started meeting other musicians who shared a similar interest in music to them. By jamming with them the band started to expand and got Agrim Ganti (drummer) and Zohair Abbasi (Guitarist) on board. Through mutual connections, the other vocalists, Vidushi Pradhan and Priyesh Shah also become part of the band. The final and latest member of the band is keyboardist, Rachana Ramchand.

For the London International Arts Festival, a slimmed down version of Side Partition will be giving a performance from Stanley Halls that will also be able available to watch via a livestream option.

Founding members brothers Ranit and Rajit are joined by Rachana on keyboards as they play original tunes along with their versions of songs they held dearest when growing up.

The Side Partition spokesperson said: ‘Rajit Shail, the bassist, is the support and rock of the band, both musically and as a band member. His bassline not only gives us the groove and that element of fun, it completes our sound and gives us that stability…Rachana Ramchand, who has been our latest addition, has re-ignited our flame and brought back that energy and inspiration. Her knowledge and dedication to music is motivating to all and when she touches those keys it brings smiles to everyone… And Ranit Shail, is a jack of all trades. He can sing, play the guitar, keys, everything and is the main source of creativity. His voice will take you someplace else and – according to some – has healing abilities.’

Side Partition has over the years been on TV, radio and added numerous accolades to their name:

• Selected in the Top 15 bands in UK from over 1200 entries, on BBC 4’s UK’s Best Part-Time Band TV Series. The show was  judged by music legend ‘Jazzie B’ and the band managed to reach the Semi-Finals of this UK wide competition telecasted on BBC 4 and BBC 2.

• Part of the UK wide Alchemy Tour in 2015 and performed with Britain’s Got Talent’s runners up Signature in Birmingham, London Southbank Centre, Oldham and Manchester.

• Selected to perform live in front of 25,000 for Diwali at Trafalgar Square.

• Winners of the Rock Shock – Battle of the Bands competition.

Side Partition – presented by Tuned In London and London International Arts Festival.
Stanley Halls, 12 South Norwood Hill, South Norwood, London SE25 6AB. Time: Wed 9th Dec, 7.30pm. Admission: £15 http://tunedin.london/
http://liaf.co.uk/
It will be live with an audience – ticketed – as well as livestreamed.  For those watching at home, a donation would be very much appreciated: https://bit.ly/3neGzCE

Here are some links to the work: