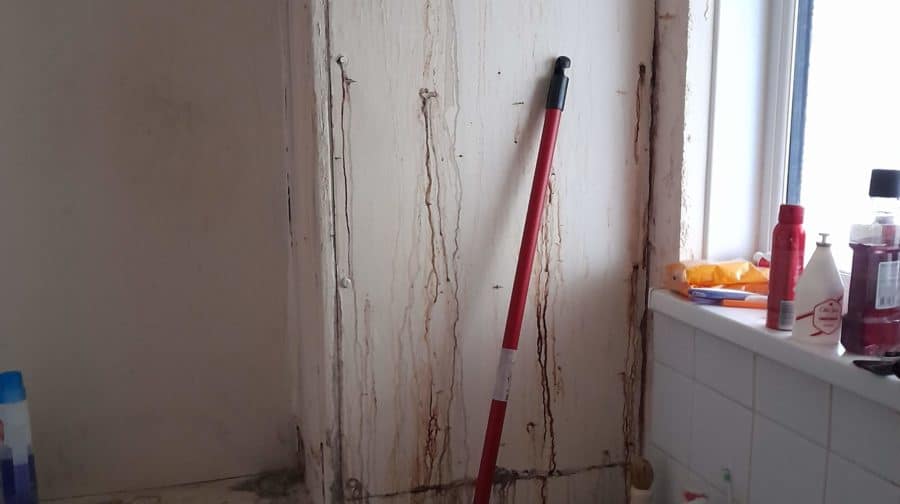 The stain on the bathroom wall

A vulnerable pensioner living in council sheltered accommodation who was hospitalised with legionnaires’ disease more than two months after asking Southwark for help with dirty water leaking through his bathroom ceiling has slammed his “disgusting” treatment.

David, which is not his real name, turned 73 this week and has lived in his one-bed flat in Marden Square in Bermondsey for eleven years.

In March this year he noticed water dripping through his bathroom ceiling, leaving a nasty brown stain on the wall.

He asked council officers via email to help seal the leak, but was told several times to contact another department. Promises were made to fix the problem, but each time council staff missed the appointments, he said.

“I sent dozens of emails, saying stuff like ‘I’m exhausted, I want to throw myself off the balcony’. Sixty-nine days of mopping the floor. One day I was sitting in the bath and it felt like I was sitting in sewage because of the smell, the horrible smell of the stuff. It’s come down from the top floor- it’s basically stagnant water.”

In growing desperation, David contacted local MP Neil Coyle and North Bermondsey ward councillor and Southwark Lib Dem leader Hamish McCallum, both of whom said they would raise his plight with the council.

In the meantime, he was also growing increasingly ill and feverish. Legionnaires’ disease is a kind of pneumonia caused by breathing in airborne water droplets containing the legionella bacteria. It can be very serious: one in four people with underlying health conditions die of legionnaires’ disease, according to US public health authorities.

“It affects your lungs, but I was also having hallucinations. I had hot and cold shivers. I had a heater but then I was opening the doors and windows.”

“It was on my mind the whole time. The water going ‘drip drip drip’. I kept thinking ‘if it comes out into the hallway it’s going to be getting worse’.

The leak was sealed in mid-May, but by this time he was already very unwell. Things came to a head on May 22, when he sat all day trying to drink a pint of water because he was sweating so much. He could only drink through a straw because he was struggling to breathe.

“By the end of the day, I must have sweated a gallon,” he added. “I’d only drunk a tiny amount of water. My temperature had been going up and up and up. I decided to phone for an ambulance.”

Doctors diagnosed him with legionnaires’ disease and he stayed in hospital for a week. “I’ve had thousands of injections, intravenously, injections in the gut. It’s left me totalled. I’m really shagged out.

“You don’t want to be tied to the wall with an oxygen line, I can tell you that. It’s like being a dog on a lead.

“Specialists told me it could take months to get back to where I was. I’ve been reading up on it and for some people it takes years. I just feel knocked out. I’ve been getting up, doing something and going back to bed. Just falling asleep, virtually. It’s terrible.”

Southwark Council has confirmed that the South London Health Protection Team are investigating one case of legionella in the area, but that there is no evidence of a wider outbreak.

David plans to sue the council for their actions, although he has to prove definitively that he got the disease from the leak into his flat. The long, brown water stain on his bathroom wall is still there, months after the leak started, so he is getting a chemical company to take a sample.

“It’s disgusting that they did nothing for so long,” he added. “They just gave us excuses – ‘it’s not us it’s them. No it’s not us it’s them’… They told us many many times that they were going to do it, but they never did. Just rubbish, absolute rubbish. I feel they’ve neglected their duty of care.”

It’s disgusting carry on and always the vulnerable of late suffer at the hands of our incompetent LBS Council however same is happening our estate dare I say Borough Wide and if this person David wants to contact me suppose via Southwark News I would like to meet him. I live not far from where he lives we could maybe share information regarding contamination and LBS handling/ failure to test or do works satisfactory and help lots of others especially want to sue going through similar harrowing conditions here too maybe get some restorative justice. Well done though David fighting this well done it will set a precedent for so many!