Submit any feedback on the project website before June 21 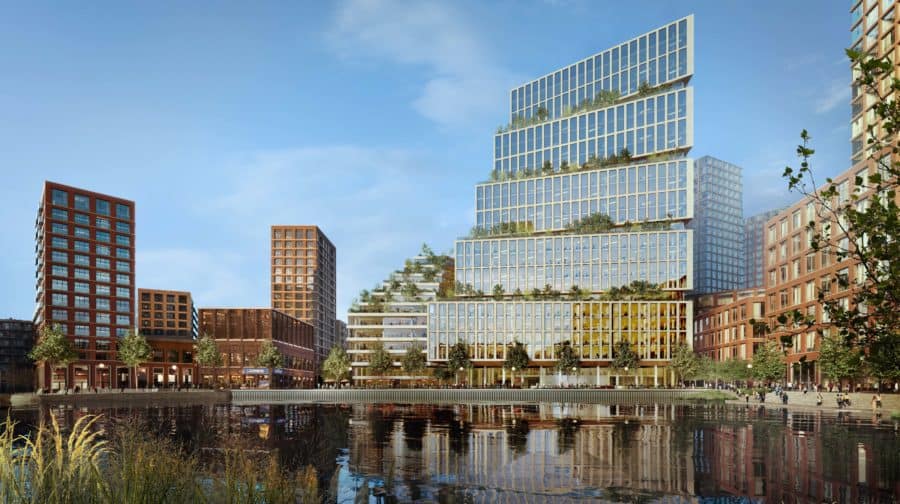 The latest plans for a major new Rotherhithe development are now available to view online.

Developers Art-Invest Real Estate plan to build offices, shops and cafes on the 4.5 acre Canada Water Dockside site on the east side of the lake.

Sitting next to British Land’s massive Canada Water masterplan there are also suggestions for indoor and outdoor public spaces, as well as a food hall, health centre and ‘community hub’. A central walkway would run through the site from Deal Porter’s Square to the site where the Printworks music venue is now and to the new park to be put in as part of the Canada Water masterplan. Free wi-fi would also be available.

Art-Invest said they had carried out wide-reaching talks with local residents and had spoken to people who had never taken part in a planning consultation before. Locals canvassed by the News said they were impressed with the plans.

The German developers, for whom this is the first major London project, hope the Canada Water Dockside site will bring 10,000 new jobs to the area.

Asked whether the widespread shift to working from home had affected Art-Invest’s plans, development director Luka Vukotic said: “We went through a very turbulent twelve months, which nobody could have predicted, but we’re also realising that we’re coming to an edge, where we need to see people, need to go back into the real world.

“Maybe not in the same way that we did previously – if you’re sitting in front of your desk and just doing a bit of work you can just do that at home. A large part of what we do is actually interaction with people. That’s how we think offices will survive as workplaces of the future. A lot of the old style that is based around desk work will actually become obsolete in the future. The offices that look like workplaces of the future – I look at the example of a diesel car versus an electric car, we used to drive diesel cars perfectly fine for many many years. But I think we’ve come to this point where most of the car manufacturers will be solely electric cars. And it’s such a big paradigm shift.

“It feels like we have seen a paradigm shift in office working where we’re used to coming to an office and sitting at a desk – but actually the future is going to look very different. And a lot of the offices that are only equipped to deal with day to day sitting at your desk will become something that people don’t want any more. These new places that are a lot more flexible will become a lot more desirable like electric cars.

“What’s amazing with Canada Water and the reason we became attracted to this place in the first place is… it’s got the river and two great water bodies. It’s got a great community around it, we think that being able to go to the office and do more than just sit at work – go to Stave Hill Ecological Park in your lunchtime, or go to the athletics centre and run, join the angling club and do some fishing to relax.”

Unemployment was at 4.8 per cent from January-March, according to the Office for National Statistics and the Bank of England expects that figure to rise again later in the year as furlough comes to an end. With jobs getting harder to come by, some might be sceptical that office workers will be able to dictate terms to their employers. But both company bosses and their employees have both come to appreciate the importance of mental and physical wellbeing over the past year, Mr Vukotic said.

As for the impact on local public transport, which was already very busy before the pandemic, Art-Invest hope that the addition of the new development will not be felt too strongly, as the commercial space is likely to bring people in in the mornings and out in the evenings, in contrast to commuters who live in the area.

Anyone who wants to comment on the latest plans should do so before June 21. The developer will submit planning permission later this summer.