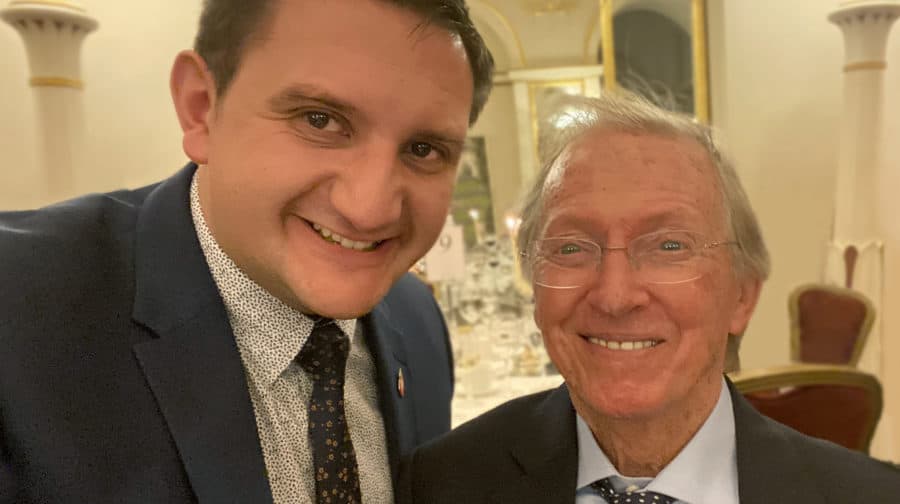 With Millennials born into an era of Britney, Spice Girls, Eminem, Blur, Oasis, Blink 182 et al you’d think they would have a good and broad appreciation of their generation’s music. And I’m sure most of them do. But then there is Sebastian Lassandro who says, ‘I was born in 1992 and spent a lot of time with my Nan and Auntie and through them enjoyed the likes of Al Jolson, Max Bygraves, Elvis Presley, Matt Monro, Joe Longthorne, Vera Lynn, etc.’ Sebastian had me at the mention of fellow Rotherhithe man, Max Bygraves, writes Michael Holland…

Master Lassandro grew up with Max singalongs and WW2 compilation CDs, through which he discovered Gracie Fields. He reveals that ‘she quickly became a passion’ and since that time Sebastian has become a respected authority on Fields, building up one of the largest collections of memorabilia, and has been a consultant on many projects on ‘Our Gracie’. His admiration led to a two-volume biography detailing her life and career, with research done both here and in America. Then, in 2005, ‘Auntie let on that she used to be in the Tommy Steele fan club – a name I’d never even heard of… I was given a ‘Best of’ Tommy cassette and from that moment on I was hooked!’

And it is Tommy Steele that now fills Sebastian’s world. Like his Gracie archive, his Tommy collection is continually growing. ‘This year,’ he says, ‘I compiled a CD of ‘Hits and Rarities’ from my own Tommy archive of rare and unreleased live recordings and studio material.’  (https://www.amazon.co.uk/Hits-Rarities-Tommy-Steele/dp/B091DWS42T) 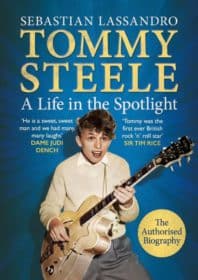 I was amazed at how this young man, born on the outskirts of Manchester, who became an English teacher, has such an obsession with someone many of us in Bermondsey grew up knowing about. We know he has a block of flats named after him and a Blue Plaque in Dickens Estate where he once lived, and that is how we should treat our local legends. Sebastian’s fervour is, for me, intriguing for one so young, for someone who says, ‘I’m just a teacher with a passion, with a story to tell’.

There is nothing more mesmerising than listening to a person talking about their great passion, with great passion. Tell me more, I pleaded.

‘Since I first met him in 2006 I’ve followed his shows up and down the country – seeing them as many times as possible. I know I’ve missed out on 60 plus years of his career live on stage so I’ve got a lot of catching up to do!’

‘Tommy himself considers me as his go-to archivist – which is an absolute thrill and privilege. When I suggested that I might write his complete career chronicle to celebrate his 65th anniversary, he graciously gave me the go ahead as I know so much about it. He said, ‘you’re the person to do it if the story’s going to be told.’

And that is where Sebastian is right now. His book Tommy Steele: A Life in the Spotlight is released this month, and says, ‘I’ve been very lucky to speak with many people who have worked with and known Tommy, been given access to rare and previously unpublished archive material and, along with thousands and thousands of newspaper articles, reviews, programmes, documents, have been able to collate them all together to tell the complete career chronicle of Britain’s greatest ever showman.’

Continuing in this vein, his dedication hits the extremes with bold statements about Fields and Steele that I’m sure he would argue are undoubtedly true: ‘They’re both easily the two greatest performers this country has ever produced… They possess a ‘star’ quality which cannot be matched…’ I wasn’t going to argue.

Sebastian went on to describe how the Bermondsey Boy diversified within a year of being the first UK Rock ’n’ Roller into becoming a family entertainer, and moved into musical films; Little White Bull and Half A Sixpence crop up now and again on Talking Pictures TV.

He told me of how Tommy was still trying something different in lockdown with two new online audio-stories: ‘Breakheart’ (a WW2 thriller), and a Christmas tinsel-tale, ‘The Christmas Mystery of Muchhope’. ‘I was absolutely honoured to be asked by Tommy to help with the production and promotion of these new ventures; a real “pinch me” moment when someone you’ve idolised rings up and asks for a favour!’

You can read about Tommy dancing with Gene Kelly and Fred Astaire; working with greats such as Walt Disney, Alec Guinness, Judi Dench and John Gielgud, breaking West End theatre records, his OBE, his Knighthood, his squash playing, his sculpting, and a list of every single performance and venue Tommy has starred in from 1956-2021! And more. This leaves me little else to say, except: Sebastian’s book is the culmination of 15 years of serious fandom and research and deserves to be read.

Tommy Steele: A Life in the Spotlight is released 24th June 2021

Available to pre-order from all good bookstores and online at Amazon or from the publishers directly at Fonthill Media.