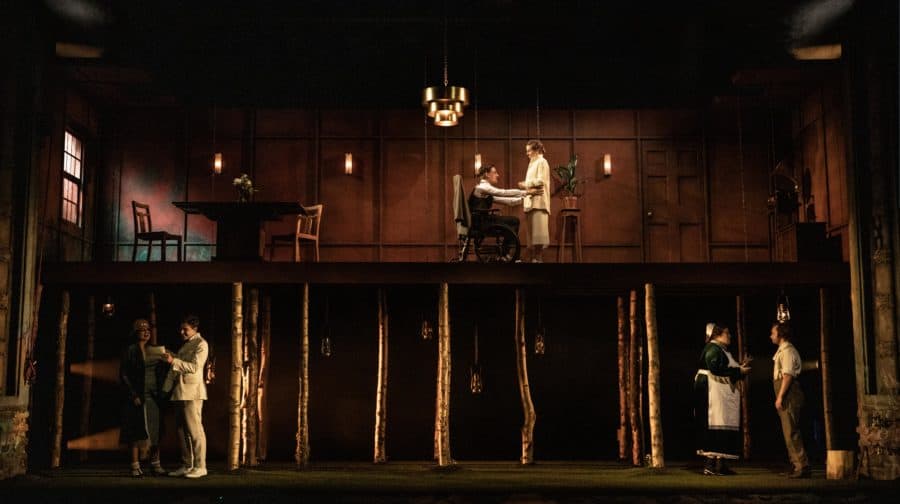 Nevertheless, let me hasten to add that this stripped down version has all the necessary components of a great West End musical with none of the nuances of Lawrence’s text lost in this reimagining; the ignominy of class structure is portrayed in all of its ugly light, the working-class are depicted as downtrodden, and emotions are shown to be classless when people find themselves powerless against having feelings across the class divide.

There are no foot-stomping numbers in this production, no hoi polloi clomping round in boots and braces, but gentle tunes to fit the subject matter. And under award-winning director Sasha Regan’s charge the songs by John Robinson were made beautiful. Sometimes, when all the voices were utilised it felt like a full choir.

Lady Chatterley’s Lover opens with Constance falling in love with Clifford Chatterley, a member of the aristocracy from a line of money and power built from coalmines and the lives and sweat of the Derbyshire poor. Chatterley is sent to war soon after marriage but returns paralysed from the waist down and impotent, meaning there will be no male heir to his baronetcy.

But Mellors, who was Clifford’s batman during the war, and ‘saved his bacon’ more than once in battle, is now the estate gamekeeper, so chance meetings between him and Lady Chatterley in the grounds are inevitable. With her husband becoming increasingly bitter over his emasculation he eases his pain by taking it out on his wife and staff, so it isn’t long before Constance feels a longing for love and affection in the form of Mellors. A feeling that she yields to in his hut in the woods.

Strangely, for a book that was banned in the UK because of its explicit descriptions of the sex act and the use of swear words, there is none of either. After whispered sweet nothings and a heated embrace the lovers would skip off through the trees to the gamekeeper’s hut offstage. Mind you, it would be difficult to turn down a lady who sang love songs so sweetly. 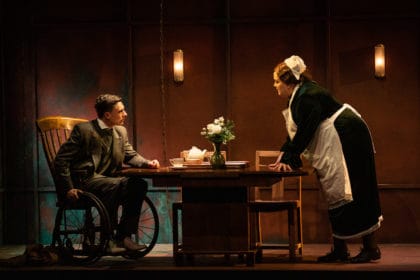 Jake Halsey-Jones plays Tommy, an amalgam of all the bright young twerps that visited the Chatterleys, and had some of the best lines for camping the show up. Zoe Rogers played a servant girl and Mellors cheated wife, with Sam Kipling as the tragic and helpless Sir Clifford who we all quite rightly despised at the end. Georgia Lennon and Michael Pickering smouldered in the main roles but, for me, it was Emma Lindars as Mrs Bolton who shone the brightest. She was a joy to watch as slowly but surely she became the power behind the wheeled throne as the crippled Baronet became more and more dependent on her while he regressed back to a babyish Eton mess. She was so good I’d love to see a follow up called Lord Chatterley’s Nurse, where Mrs Bolton sends the aristocrats, who had never experienced so much as a dirty fingernail, down the mines to keep the real workers in good food and wine. Plus, it would be remiss of me to ignore the wonderful Upstairs/Downstairs set that was used to perfection.

It was difficult to gauge the audience with the Covid-safe restricted numbers in the Shaftesbury Theatre, but when, as one, we all rose from our seats for a standing ovation, I knew I wasn’t alone in my enjoyment.

To paraphrase a damning exchange in the 1960s’ obscenity trial of D. H. Lawrence’s Lady Chatterley’s Lover, I’d love my wife and servants to see this production.

Later in the year there will be a chance to catch this again when it will be streamed online. Watch this space.