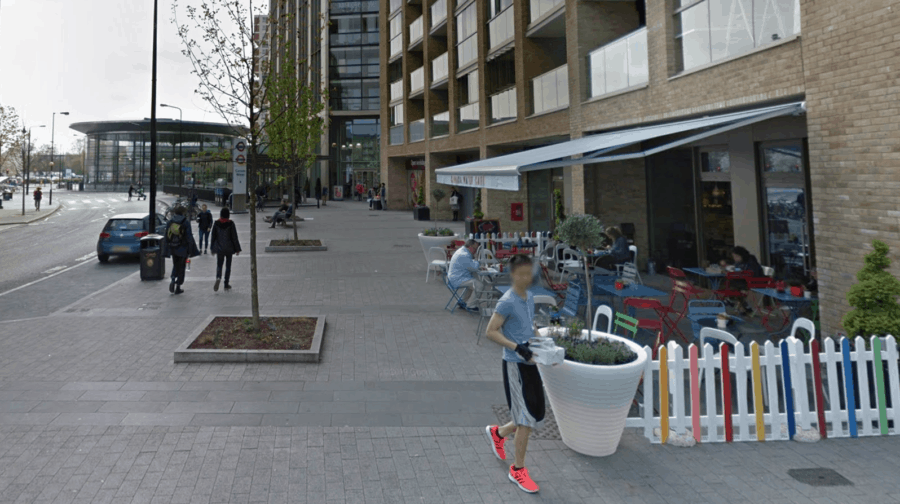 An eight-month pregnant woman is calling for more support from police, after her phone was snatched from her hand for the second time in two years in Rotherhithe.

Panayota Athanasiou Petrou was waiting for a taxi outside the Canada Water Cafe on Surrey Quays Road at about midday on Sunday June 13 when two men rode up on a moped behind her.

“It was quite hot that day, it was when we were having the heatwave,” she said. “I’m eight months pregnant and I was standing there quite distracted with my hands full. I was tracking my car so I had my phone out.”

The man on the back of the moped reached out and grabbed the phone from Ms Petrou’s hands, she said – just before her taxi arrived.

“I was crying my eyes out in the back of the car,” Ms Petrou said. The driver encouraged her to call the police, which she did from his phone. By this time she had already left the scene of the crime. “I was shocked and disoriented,” she added.

Police told the News they have received the report and are investigating. Although she is close to giving birth, Ms Petrou went back to the place where she was robbed the next day to ask for CCTV footage from a nearby building herself, but was unable to get it. She also said officers told her the CCTV might not be enough as the men’s faces were covered.

To make matters worse, Ms Petrou, who has lived in the area for about eight years, was mugged less than two years ago while walking along the nearby Albion Channel canal. A teenage boy ran up from behind her and snatched her phone.

“He made no attempt to conceal his face so I got a good look at him,” she said. “We had a bit of a tug of war, he got quite panicky but he managed to grab my phone and run off.” At the time, she said, the police told her they did not have the resources to investigate.

Both crimes have given Ms Petrou “a disheartening, frustrating feeling,” she said.

“I’m South African and this sort of thing never happened to me there, believe it or not… The point is that if you can’t walk around your neighbourhood and feel safe it creates a feeling of paranoia that is unhealthy.

“It’s not normal! It shouldn’t be normal anyway. It’s very upsetting. There are people who have lived in the area much longer than me but I consider myself a local. There’s so much good about this area, so much happening here but this is a real thorn in our side.

“You can’t speak to one person in the area who doesn’t know about this, either because it has happened to them or someone they know.”

In an echo of comments made by local people that we have previously reported, Ms Petrou bemoaned the ease and frequency with which thieves operating in the area seem to be able to steal the phones.

The police sergeant for the Rotherhithe safer neighbourhoods team told us last month: “we are aware of the issue and we are putting measures in place to try and stop it.”

But Ms Petrou added: “As a pregnant woman, I’m clearly more vulnerable than I would be elsewhere. I now think to myself – oh God can I even go out and do things, go and get a coffee? Am I going to be in danger?”

“It’s definitely put a bit of a dark cloud around the area… I’m about to have a baby. It’s made me feel more jaded about the area – it’s made me angrier.

“Even if I have friends coming to visit, I have to tell them ‘please keep an eye on your phone’. It’s not a good situation to be in.”

A natural reaction is to encourage people to be more wary in areas like Canada Water where they know phones are more likely to be stolen. But as Ms Petrou put it: “you can’t be on your guard 24 hours a day.”

“It was boiling hot, my hands were full,” she added. “All they need is five seconds for you to be distracted. And you can’t live in paranoia the whole time. That’s not living.”