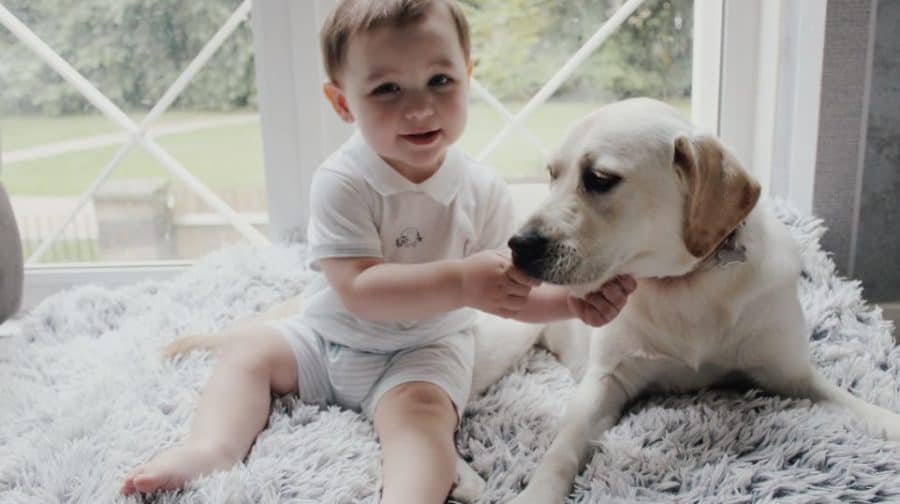 One of Jade's children with her dog Willow

A Rotherhithe woman was left dismayed after police dropped a case involving a man she accused of trying to poison her puppy.

Jade, who asked for her last name to be left out, was walking her seven-month-old yellow labrador Willow along Needleman Street near Canada Water tube station with her partner and children on Sunday June 20, going towards Southwark Park.

They noticed a man ahead of them had dropped a packet of ibuprofen pills with each seal already torn open so the pills could easily be taken out or fall out. Jade and her partner caught up to the man to let him know he had dropped them. Ibuprofen can be very dangerous for dogs.

“We thought ‘that’s very strange’, Jade said. “We caught up to him to make him aware, we just said ‘excuse me’ and he completely freaked out.

“He said ‘I don’t care about dogs, I don’t want anything to do with your dog. We thought ‘we haven’t even mentioned our dog’. All we wanted to tell him was it could be dangerous for Willow to eat the ibuprofen. But his reaction showed us his intentions were not great. He started to film us and told us we were harassing him.”

Jade and her partner phoned the police, who investigated and said that no offence had been committed and the dog was not harmed.

But Willow soon got sick with a gastro-intestinal problem. “She’s been quite tearful… she hasn’t really cried or barked since we got her, but for the last week she has been quite upset,” Jade said. Willow has been on a special diet and is recovering.

The incident has made Jade “wary”, she said. “Normally I’ll walk her along Deal Porter’s way, which is quite a nice walk. I used to take her off the lead but now I’m not going to let her off. A lot of the dog walkers I’m talking to are saying the same thing. It’s too dangerous.”

A spokesperson for the police said: “On Sunday, 20 June, Police were made aware of a report of attempted animal poisoning. The dog was not harmed.

“Officers launched an investigation and determined that no offences had been committed. The local policing team has been made aware and will continue to monitor the situation.

“The complainant has been made aware of the outcome. No arrests have been made.”

Jade said: “I understand… but what if it just keeps happening but it’s more serious next time? I walk with my kids in the area too and they’re curious. What if a child picked up a tablet, and they were then to get ill. Would it be serious then? Does it have to get to that point?”

Even aside from the specific concern about pills, Jade urged people in the Bermondsey and Rotherhithe area to be more careful about what they leave lying around outside.

We were walking Willow and came across a massive chunk of mouldy meat. My daughter said ‘Oh mummy she’s eating something’ and we had to get in there and stop her.”