'She wasn’t just an exceptional nurse to me but a great nurse and leader. Without her, I wouldn’t be where I am today,' patient Ellis Kottas said 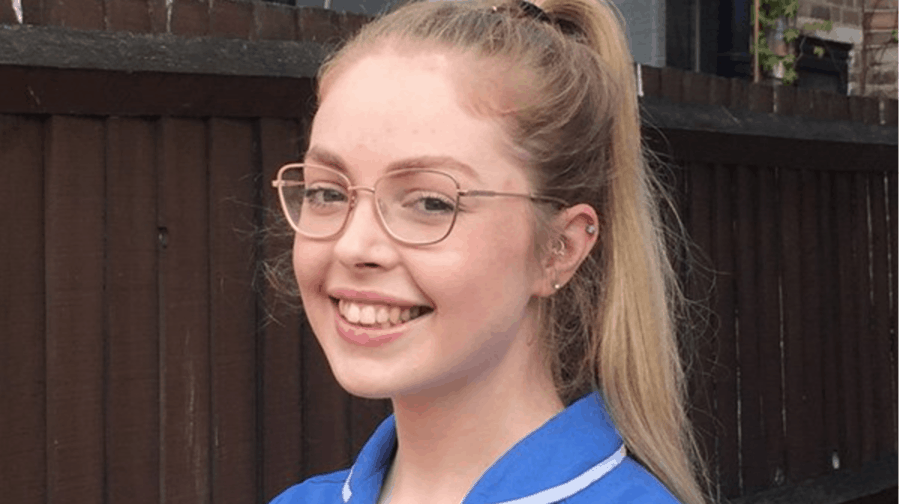 A junior nurse at King’s College Hospital has been nominated for a national award for her outstanding care for a teenage patient in severe physical and mental pain.

Orna Carey helped look after seventeen-year-old Ellis Kottas, who was bed-bound at King’s for two and a half months with spinal injuries she suffered while at a mental health unit.

Ellis, who has autism, naturally struggled to come to terms with the injuries and the pain she was in – but Orna’s care and attention, even after her twelve-hour shifts had ended, were a great help, she said.

“I was an inpatient for my physical injuries at King’s for a whole year battling with pain and having surgeries,” Ellis recalls.

“I was bed-bound for months. The year I spent in hospital was not easy. I struggled greatly both mentally and physically. But Orna Carey’s dedication and kindness has been so important. It was the boost I needed to keep me going on my journey.”

Now Ellis has nominated Orna for the Patient’s Choice prize at the Royal College of Nursing’s awards. Orna is one of six nurses nominated.

“It started off just being chats but Orna was always so busy that it was hard for her to find the time, so she would stay behind after her 12-hour shift to talk to me,” says Ellis. “Then she started bringing in sweets, or making time to plait my hair. I always looked forward to her next shift.”

When Ellis was finally going to leave the ward, she asked to be woken up so she could say goodbye to Orna, but she ended up oversleeping. She was very upset. “It got to 5pm and suddenly Orna burst into my room in her own clothes, hair down, and with a Percy Pig toy and sweets.

“She had remembered I was leaving and called the ward to see if I was still there and rushed in. We had our last chat and said goodbye and I left with my little Percy Pig, which I called Orna.”

Ellis has kept the toy with her ever since for added support. “That Percy Pig was by my side through difficult meetings, physio sessions and two kidney infections.

“Orna never had to be that kind or go the extra mile for me, but she did – and it made all the difference. When I bumped into her four months later, I was so happy and excited even though the appointment I had was to discuss my next surgery, a day which wasn’t set to be particularly great.”

After having a tough time in mental health services, Ellis’ trust in the NHS was also restored, which both her parents and Orna believe has been of vital importance to her progress and recovery.

“She was the first person I felt able to open up to and trust again,” says Ellis. “We could talk about my worries or about life outside the four walls of the ward. She made me feel wanted and that I deserved the help, which I had always found hard to believe.

‘I have autism, so leaving the ward was a difficult change for me. Orna’s kindness on my last day made that transition much smoother. And the physical reminder of the toy meant so much to me. It made me able to recall her values, which guided me through the rest of my recovery in rehab.

“She wasn’t just an exceptional nurse to me but a great nurse and leader. Without her, I wouldn’t be where I am today.”

To vote for Orna visit https://secure.rcni.com/nurse-awards/patients-choice.