Kirby Estate: father criticises council after swing snaps with his son playing on it

Southwark Council said the playground was last checked on July 26 and no faults were found. 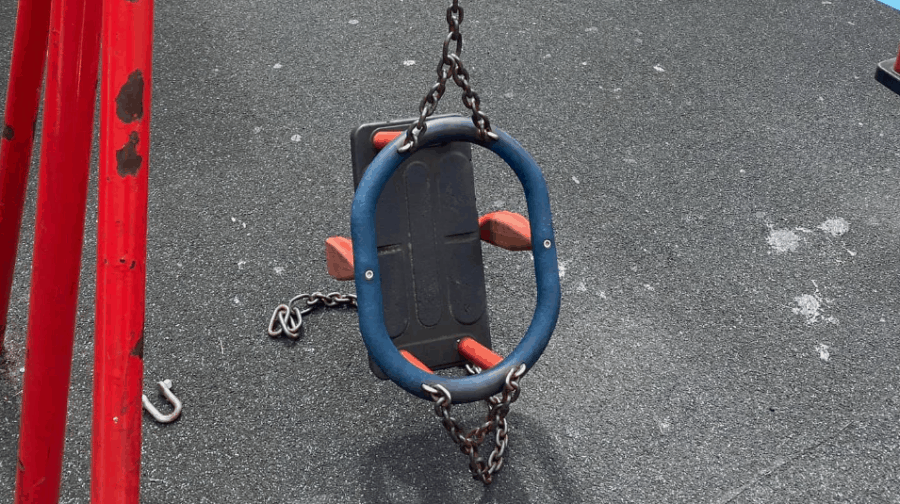 A father on ‘England’s most patriotic estate’ has hit out at Southwark Council after a swing his young son was playing on snapped in a dangerous incident.

Chris Dowse, who is one of the ‘three musketeers’ who help organise the nationally-famous England flag display during football tournaments, said his four-year-old child was playing on the swings in the playground of the Kirby Estate with his cousin when it broke.

Luckily the boy was not hurt, but Chris said the condition of the estate’s play area was symptomatic of a wider problem.

“He was shook up, that’s for sure,” Chris said of his son. “It’s not what you expect when you’re just playing around as a kid.”

Council workers have now taken the swings away, and Chris said the brackets that attached them to the frame were in a bad state.

“So it doesn’t look like the park has been maintained full stop,” he added. “You only have to take a look at the area to see how run down and dilapidated it is. ”Southwark Council said the playground was last checked on July 26 and no faults were found.

Chris said that people on the estate struggle to communicate with the council because they do not have a tenants’ and residents’ association (TRA).

“I look at other estates like the Neckinger and their park looks great. But just because an estate doesn’t have a TRA, it doesn’t mean something should be left to go to rack and ruin.”

Councillor Stephanie Cryan, cabinet member for council homes and homelessness, said: “We are very concerned to hear that a child was almost injured and would be grateful if the family could get in touch to let us know what happened so we can follow it up.

“We inspect all our children’s play areas very regularly, the one on the Kirby estate was checked two weeks ago, on the 26th July, and no faults were found. We would encourage anyone who finds any issues with play equipment in-between our inspections to tell us immediately, it would be dealt with as an emergency repair.”

Southwark NewsNewsKirby Estate: father criticises council after swing snaps with his son playing on it