'We have concerns that Robert Hutchinson was unfairly targeted as a result of his vocal opposition to development plans for the Elim Estate.' 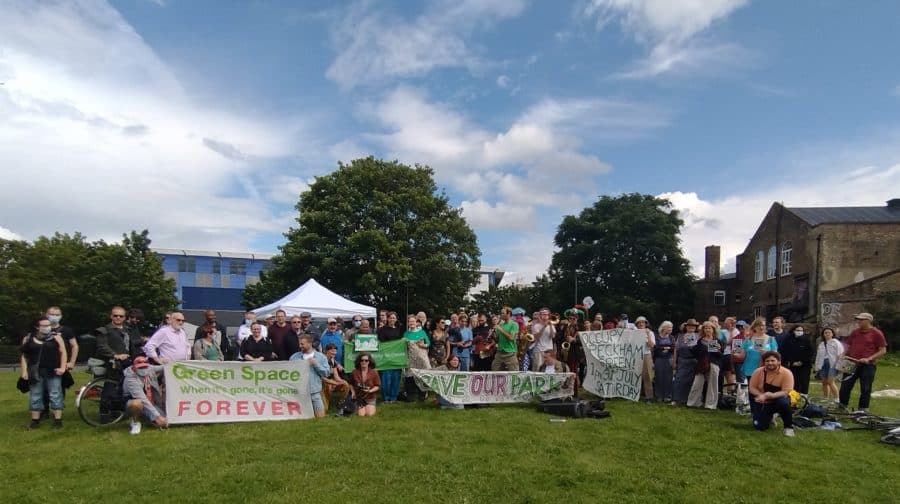 A previous housing protest from earlier this month

A group of Southwark campaigners opposed to the council’s social housing programme have alleged that one of their members was arrested for political reasons.

Groups including Southwark Defend Council Housing, Up the Elephant and Yes 2 Fair Redevelopment are among the signatories to an open letter sent to Southwark Council leader Kieron Williams, which claimed that Robert Hutchinson (pictured), a campaigner against plans to build new council housing on the Elim Estate in Bermondsey, was arrested because of his activism.

The council denied this allegation, telling Mr Hutchinson that officers were not aware of his arrest before it took place.

Mr Hutchinson was arrested earlier this summer on suspicion of hacking into the website of Leathermarket Community Benefit Society, the housing provider that plans to build council homes on a play area in the estate. He said he accessed the documents via a simple Google search. Police later found he had no case to answer.

The letter told Cllr Williams: “We are appealing to you in light of the arrest of Robert Hutchinson of Save Elim Ballcourt campaign as a result of unsubstantiated allegations made by Leathermarket Community Benefit Society (CBS).

“We have concerns that Robert Hutchinson was unfairly targeted as a result of his vocal opposition to development plans for the Elim Estate.”

The letter went on to outline several allegations against Leathermarket and the council, drawing attention to the £985,000 given by the council for the planning application by February this year, according to the board minutes.

Leathermarket said this money is a “normal” amount for this kind of application and was used for feasibility and design stages, including surveys and professional fees, for the three sites considered on the estate.

Other allegations include Elim estate residents being encouraged to speak out in favour of the application and Leathermarket board members submitting comments in favour.

The letter continued: “No Southwark resident campaigning to save a ball court for the greater good of the community should be singled out in this way.

“Something went terribly wrong and we want to know what Southwark Council knew about this occurrence.”

Campaigners pointed out several instances of Southwark estates included in the infill programme where some residents have alleged that the council has not carried out proper consultation.

The letter called for an overhaul of Southwark’s council house building programme to avoid green spaces and recreational areas, and an independent inquiry into Mr Hutchinson’s arrest – and the relationship between Leathermarket and the council. Campaigners also told Cllr Williams that they wanted the Elim Estate application halted while these inquiries were ongoing.

Deputy leader Cllr Jasmine Ali, replying on behalf of Cllr Williams who was on leave, told campaigners that the council knew nothing of his arrest before it took place and advised them to contact the police for answers instead.

Cllr Ali added: “I am sure that you know, the Metropolitan Police are not accountable to Southwark Council, so all questions related to the circumstances around, and decisions that lay behind your arrest really must be directed to them….

“As far as I am aware, our officers were not aware of any allegations made against you before your arrest. Any decision to refer this matter to the police was a matter for the CBS who, if they believed a criminal offence was committed, would have a duty to inform the police.

“Therefore, we cannot answer any of your questions related to the decision or process through which the referral was made, because we were not involved.”

In response to campaigners’ calls for an inquiry into the relationship between the council and Leathermarket, Cllr Ali pointed to the two organisations’ publicly available management agreement.

Mr Hutchinson is one of many local residents who opposes plans to build 32 homes on a play area on the Elim Estate. Leathermarket has said that the new homes would mean they could rehouse families currently living in accommodation that is too small for them – a huge problem in Southwark, with thousands on waiting lists or in unsuitable housing.

Residents have since been offered the chance to vote for a new plan that would still see 32 new homes built, but that would also keep the outdoor play area. The tenant management organisation’s plans were originally set to go in front of Southwark Council’s planning committee on June 15, but this has been pushed back.

A spokesperson for Leathermarket said this week: “We would like to re-iterate that Leathermarket CBS remains committed to working in partnership with Southwark Council to build new, genuinely affordable Council homes on infill sites across the JMB Estates, to help meet the high levels of housing need in an area of high property prices.”

The dispute is one of many across the borough over where to build many of the 11,000 new council homes promised by Southwark before 2043. Residents on existing estates have frequently opposed infill plans to build on areas including car parks or green spaces near their homes, citing loss of light, mental health concerns and inconvenience.