Landlord LSHA and developers Apex Airspace visited the house after the resident complained this week and said they are trying to work out a solution. 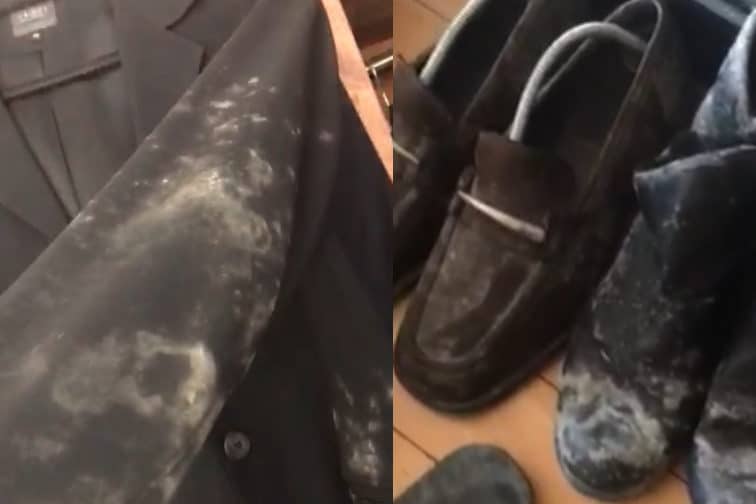 Some of the mouldy clothes and shoes

Residents of another flat in a Bermondsey development that has suffered a series of complaints over a period of four months have slammed developers after discovering damp and mould that spread to their shoes and clothes.

Keeley Brady and her husband live in Roderick House on Raymouth Road. We reported last week on plans by developers Apex Airspace and landlords Lambeth and Southwark Housing Association (LSHA) to build 30 ‘affordable’ flats in a so-called ‘airspace’ development on top of and between the building and Antony House next door. Many residents have been given some compensation for the inconvenience.

Keeley has lived in her first-floor flat for more than 30 years. She said in April that the noise from the drilling, which she alleged went over legal limits, was having a serious effect on her husband, who is chronically unwell, has had two brain haemorrhages, and suffers from severe mental health problems. LSHA said the noise was within legal limits.

Keeley and her husband went on holiday to get away from the noisy building work. When they got back they discovered damp in an internal wall. Video taken by Keeley appears to show that mould had spread into clothes in their wardrobe and even onto their shoes. Wallpaper damaged by damp had to be taken down and peeled off easily without a scraper. She said she spent fourteen hours one day this week cleaning the walls, clothes and shoes.

“It just goes from one thing to another at the moment,” an emotional Keeley said. “I’m at my wits’ end with this, I don’t know what to do about it – I don’t know where to turn.” Her husband’s mental health problems have been made significantly worse by the discovery of the mould, she said.

LSHA and Apex Airspace visited the house after Keeley complained this week and said they are trying to work out a solution. There is no confirmed evidence that the damp is related to the building work and the landlord and developers say the project should make this kind of problem less common.

The development, which began late last year and is set to end in December 2021, has resulted in a litany of complaints from households over noise, builders drilling through ceilings, and flooding.

Builders removed the roof of both buildings as part of the project, adding in temporary roofs that then flooded amid the recent rainy weather. Last week the News reported the story of a young mother of four distraught after her top-floor flat flooded, causing her to slip and drop her five-month-old baby.

Another family has holes drilled through ceiling in south Bermondsey ‘regeneration’

A spokesperson from LSHA and Apex Airspace commented this week: “We were advised of a problem with water penetration at 6 Roderick House on 6 September. Representatives visited the tenant and were able to confirm that the problem relates to condensation in a wardrobe on an internal wall.

“A further inspection is taking place on 8 September to see if there is anything that can be done to mitigate the problem. If residents experience issues we make sure to work together with them to ensure they are supported.

”Alongside the delivery of 30 new affordable homes, the development works will provide the gable end properties with additional insulation, helping to reduce condensation in the future. We believe the significant upgrades we are making to the building will help to eliminate problems for residents in the future.”