Bermondsey kids taken on walk through local history, from docks to gentrification 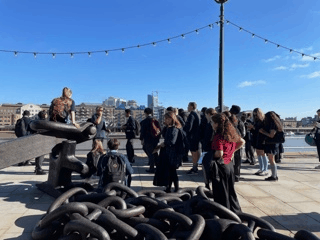 Students on the tour (Compass School)

Children from Bermondsey schools have been taken on a trip to learn more about the area’s history, from the docks and warehouses to gentrification and art.

The students from St Michael’s Catholic College and Compass School were given a tour of the Shad Thames area organised by local group Butler’s Wharf Riverside Trust and taught about the history of the warehouses, how cargo was moved and the tough working conditions for women, men and children in the area.

After that they went down to the foreshore, where they were told about ecology and the local environment. Children were also given a series of talks covering everything from the area being home to artists, film makers and punk rockers, to gentrification by the designer Terence Conran and visits from Margaret Thatcher, Tony Blair and Bill Clinton.

Thrilled to have hosted students from @CompassSE16 and @StMichaels_SE16 on the #jetty for a tour and convo re: designing the public realm with @ludwigsanna and Daniel Poku-Davies. Thx to the schools, #StOlavesFoundationFund, @TheDixonLondon and #MarioCityStrolls for a great day. pic.twitter.com/vzY1nLk8Yz

Students also talked about possible future careers and discussed how they would design the public space in the area, for all its users. They were given architects’ plans and asked to think of their own ideas.

Dr Emma Sanderson-Nash, who helps run Butler’s Wharf Riverside Trust, said: “We encourage local children to care about their surroundings and with funding from St Saviour’s and St Olaves Foundation were delighted to put on these talks as part of the Totally Thames Festival.

“The jetty at Shad Thames, owned by Petchey Holdings Ltd, is long due an overhaul, and we wanted to share our vision with the wider community, while at the same time introducing the children to potential future careers in design, architecture and landscape architecture.”

Southwark NewsNewsBermondsey kids taken on walk through local history, from docks to gentrification