His painting is a physical manifestation of his inner turmoil 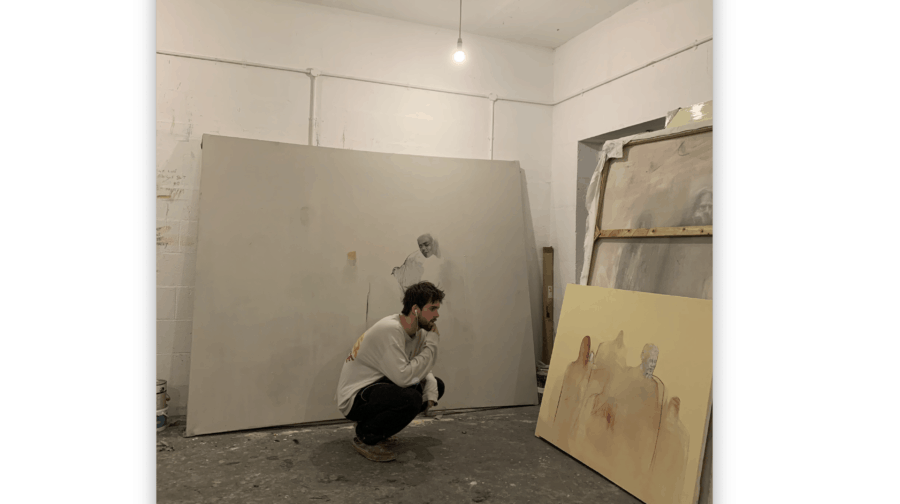 For a long time, emerging outsider artist Darren Lynde Mann had to rely on the generosity of friends and neighbours for the support and space he needed to paint. Now, at twenty years old, Darren has lived and worked independently for 4 years, and creates the majority of his work in his studio space at an old American Air Force base in Suffolk.

The move created other benefits; after instinctively looking for a larger format he began painting on old doors and exploring larger surfaces, though now chooses to paint on hand-stretched calico, using charcoal and emulsion, some of which can be seen in an exhibition of his art:Renaissance Echoes .

Darren’s emotional life is wrapped up in his practise. He finds it cathartic and sees it as a way forward to express himself and grow. His painting is therefore a physical manifestation of his inner turmoil, a documentation of his relationship to the world and his road to inner peace.

‘Without really thinking too much about what I was painting,’ he reveals, ‘I was painting how I was feeling, which I couldn’t really explain to anyone at the time.’

The young artist is inspired by, and borrows from, the Renaissance painters Michelangelo, Tiepolo, Bernini, Botticelli, & Caravaggio. He cites modern influence from Bacon and Freud.

‘I’m particularly drawn to religious and Renaissance artworks. Behind every powerful, emotive painting or sculpture there is a story, a meaning that gives such depth to the artwork.’