Give A Little Respect To Erasure

This was a very loving crowd here to see a very giving band. 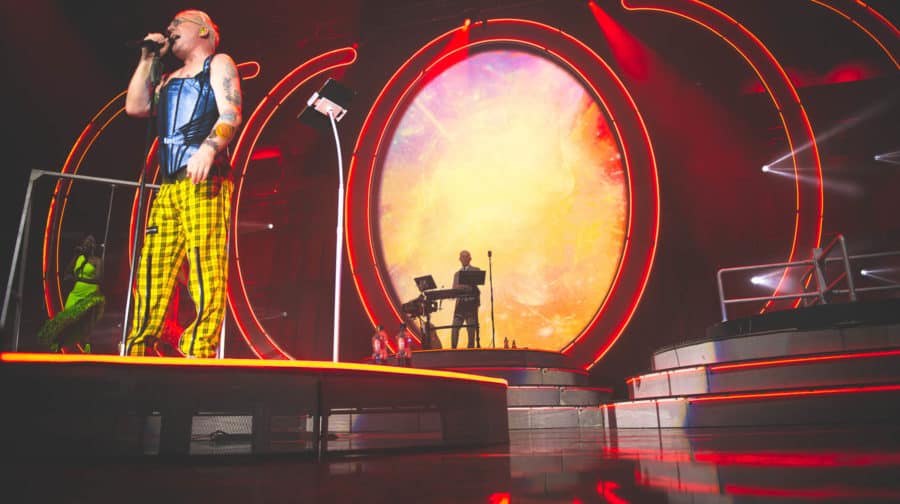 If you like your live music to be catchy, fun and synthesised then get tickets for Erasure whenever you can because this team of two (Vince Clarke & Andy Bell) are the masters of the electro-pop song, writes Michael Holland.

Bell appeared on the stage in a naughty little low-cut number, glittering in the spotlights, much to the delight of the thousands of fans at the O2 in Greenwich. Clarke, the complete opposite, crept in under the shadows in his trademark sharp suit, shirt and tie, and a classy pocket hanky. The only object that glittered on the man was his elegant tie-pin occasionally catching the light.

Having written over 200 songs between them since 1985 there was a whole back catalogue of great tunes to choose from, and those they served up did not disappoint. Each one bounced along to a computerised beat, each one rarely lasting more than two minutes, each one adding to the evening’s enjoyment.

Between songs Andy schmoozed the crowd while the evil genius Clarke, the driving force, tapped away on his machines behind him. The system works and it works well. The fans knew all the words and made sure they let the world know, even for the new stuff written during lockdown.

Chains of Love came on and the girl dancing in front to me nearly fainted at the opening chords. When my companion heard the first bars of Sometimes she was up and whooping and punching her fist in the air. The atmosphere was amazing. This was a very loving crowd here to see a very giving band.

Bell’s voice is still as good as it ever was, and Clarke donned a guitar for a couple of numbers to show that he is a musician first and foremost because, as he says ‘I find it very hard to relate songwriting to synthesisers, actually – we write songs in a very traditional way with a guitar and a tape recorder. I’ll strum some chords, he’ll sing a melody; the electronic side of things is just to create the atmosphere. It’s mostly just messing about.’

Just two people on that vast O2 stage would not look right so two excellent backing singers filled it up with glamour and voice, while using every bit of the space as they did so.

In the auditorium the clamouring audience soaked up hit after hit. Even the songs I didn’t know sounded like hits! And as the show went on the hits became bigger and bigger until they brought on a ‘Funky Choir’ for the big finale, A Little Respect. And you won’t see a better finish than that.