John Spencer's kitchen, bathroom and bedroom have all been ruined 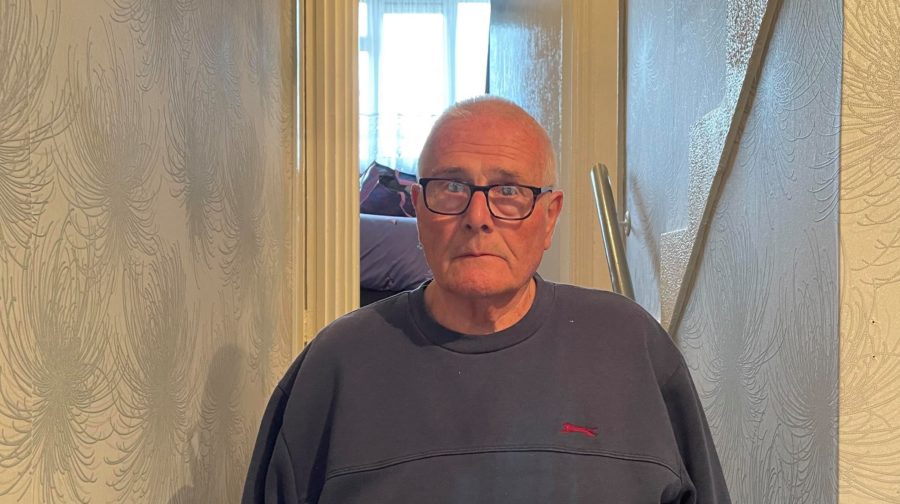 An 82-year-old Dulwich widower has been forced to spend two weeks in a flat that repeatedly floods with his neighbours’ waste water.

Since Wednesday, October 13, over half of John Spencer  flat on Overhill Road has been ruined with grease, fats and water from fifteen other flats overflowing from the kitchen sink and washing machine, seemingly caused by a blockage in the mains pipe.

At time of writing, the housing association responsible for the flat Southern Housing Group had finally sent a contractor to the flat to fix the problem, but the damage to the flat remains.

John (pictured) lost his wife of nearly 50 years in August last year, his son Mark said. “My father’s in pieces. He has to sleep on the sofa because his bedroom is ruined. If you see him now from a couple of weeks ago, he looks like a different person.

“He’s got heart issues, and he’s been there on his hands and knees trying to mop up. I’ve been doing it, all of our family has been trying to help.

“I know there’s been a lot going on about social housing issues, but until it affects you, you don’t actually realise.” 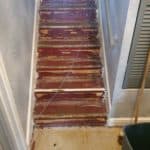 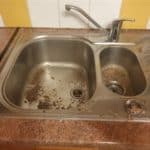 The waste emerged from the sink and the washing machine 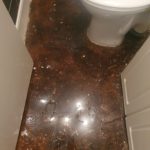 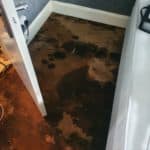 The bedroom has been rendered unusable

Mark was the first to discover the flooding when he stayed at John’s house two weeks ago. Neither Mark nor his father had been in the flat for a couple of days.

“When I first opened the front door, there was a strange smell,” Mark said.

“The flat is split across three levels. The first, the sitting room, was fine. When I went down to the kitchen on the next level, everything was covered in water, and oil, and grease and fats.

“It’s ruined the lower two floors of the property. In the kitchen there’s a big stack pipe that goes through the building and that had got blocked and everything had come through.

“Any time the fifteen flats above use their baths, their sinks, their washing machines, he’s getting all the water.

“It’s ruined two bedrooms, the toilet, the staircases, and the electricity is out in the kitchen.”

Mark immediately contacted Southern Housing Group. They responded by sending out a plumber with a bucket.

Mark said: “I called them while he was there, and said, that’s not going to be enough. They then sent someone out with a hoover. I had to get the fire brigade involved to finally clean the flat, but it was still flooding every day.

“Southern Housing offered temporary accommodation, but how can my dad leave this flat when all his stuff is here getting ruined?”

The flat continued to flood every day and John felt completely forgotten about by Southern Housing. He eventually hired private company Pimlico Plumbing to try to get the problem fixed, paying a total of nearly £2,000 of his own money.

The private plumbers found several water bottles and what appeared to be a metal lid blocking the pipe.

However, they were not able fully to fix the problem, and the flat has flooded another three times since.

Sasha Harrison, Home and Property Services Director (South) at Southern Housing Group, said: “I was very sorry to hear about the flooding that occurred in Mr Spencer’s home. The safety and wellbeing of our residents is always our priority.

“Since being alerted to the situation, we took action to ensure the property is safe and habitable. The building is old, which means that locating the underlying causes of problems can take longer. However, the cause has been located and the necessary work took place on October 26.

“We understand the frustration and disruption this situation has caused, and we are talking with Mr Spencer about his expenses and about additional works to his home.”

At time of writing, the contractor sent by Southern Housing Group had declared the pipe fixed, and would be in contact soon to fix the hole in the pipe caused by the incident. Mark stated that neither he or his father had heard from the company regarding his fathers’ expenses.

I have so much sympathy I lived in Bredinghurst and the same thing happened to me time and time again. Apart from everything in the kitchen and 3 bedrooms being ruined including photographs and personal items I could never replace the trauma of it all was too much and it ended up affecting my mental health massively. The final time it happened they finally took steps by adding a trap under my sink which they said would stop the waste coming back. They did not even help clear the mess just left me too it even though at the time there were porters living on site. They will not even turn the water off so like the man said above your flat just keeps flooding. It happened to me one bank holiday weekend and I did not sleep for 48 hours due to waste keep coming up. I eventually moved out after I was compensated a fraction of what I lost over the years. The smell and fear of it happening again was just too much.