'We need to protect and celebrate the heritage through our plans' 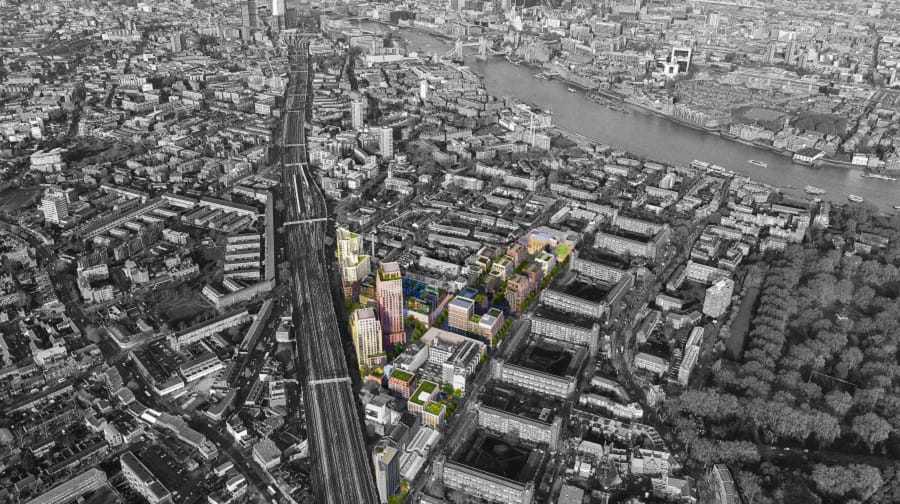 The team behind the £500million Bermondsey Masterplan have revealed how they hope their redevelopment of the area will see the historic Peek Frean biscuit factory hark back to its old days.

Grosvenor’s plans for the factory and surrounding area, drawn up by Kohn Peterson Fox Associates’ (KPF), are expected to provide up to 1,343 purpose-built rental homes, almost 2,500 jobs, and office, retail, leisure, and new public space.

Some of the buildings constructed in the ‘60s as additions to the biscuit factory, which sits off Drummond and Clements Road, are expected to be demolished as part of the plans, however all of the older factory buildings will be retained.

Fergus Evans, a senior development manager at Grosvenor, said the team hoped to “protect and celebrate” the heritage of the area, and that they understood how important it was to residents.

“Since acquiring the site in 2013 and engaging with the local residents we’ve got to know how crucial the local heritage is,” he told the News. “I think we need to protect and celebrate it through our plans so that informed our design thinking and other strands of what we are doing – but a big thing KPF brought to us was the retention of the big warehouse building.

“While it’s not one of the oldest buildings onsite, it’s quite synonymous with the history and industrial character of the biscuit factory and it’s where they used to package the biscuits until they closed.

“That’s the biggest thing we are doing in terms of physical design, but we are trying to protect the heritage through all aspects of our design.

“Effectively, all of the old buildings in the car park around the gym and café will stay, it’s really the ‘60s/’70s additions that will make way.”

The site, which is currently fenced off, will become publicly accessible 24 hours a day, and two new pathways will be opened up underneath the railway arches, linking it to the Blue. Architect Leif Lomo, from KPF, said the idea was to peel back the layers of the newer factory buildings to reveal some of the older buildings which are no longer as visible, and to open up the site to the public.

Building F – the warehouse building – will be retained but the lift tower will be removed and the façade will be kept while residential units and office space will be built on the upper floors, as well as an open and flexible ground floor which will host a mix of uses.

“We found that the site had been damaged after the war, and we felt there probably are layers of history that aren’t particularly evident any longer,” said Leif.

“It’s about excavation and seeing how we can bring these things back to life and reminding people what it was and what it could be.

“For example, we intend to use castings of the biscuits or the tins used to make the biscuits to actually make the façade of one of the buildings.”

The plans will open up a direct route through Keeton’s Road and the biscuit factory site, making it accessible to the public and mimicking how it used to be.

There will also be a walkway running parallel to the viaducts with a view of the Shard in the distance which will is proposed to be named Shard Walk. “We’ve also tried to mirror some of the public spaces from what was there originally, as shown on a map from the 50s,” Fergus added. “We propose to name the square off Clements Road Salters Square [in honour of Alfred and Ada Salter who did much to beautify the area].”

Important references, people and places from Bermondsey’s history are expected to inform the naming of different streets and spaces, and the community would be involved in the process.

The current Compass School in Drummond Road would be demolished and moved into a purpose-built 600-place school elsewhere on the same site, but closer to Bermondsey station, if the plans go ahead.

Buildings will range in height from four to 28 storeys and flats would range in size from studios to three bedrooms.

Grosvenor is proposing to provide 27.5 per cent of homes at discount market rent for people living and working in Bermondsey and across Southwark.