The celebrity chef was launching a new nutrition GCSE course. 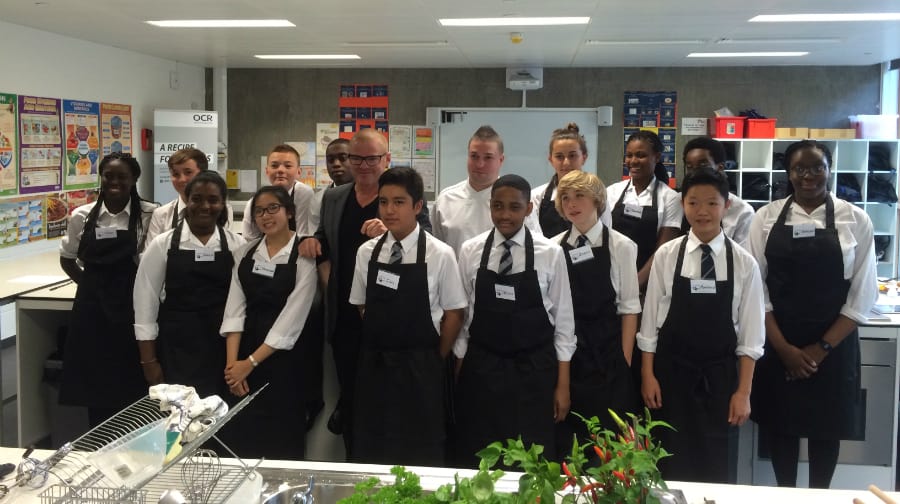 The experimental chef, alongside staff from his triple Michelin Star-rated restaurant The Fat Duck, hosted a workshop for Year 9, 10 and 11 students hungry to learn about nutrition.

Yawning pupils arrived at 5am for an early-morning ice-cream making session – although, this being Blumenthal, the ice-cream was made using liquid nitrogen.

A still from a BBC report of Heston making liquid nitrogen at the school.

In front of BBC News cameras, excited pupils then scrambled around making all sorts of egg-based goodies, from meringue to omelette.

Year 10 student Samie John told the News: “It was a really good experience, he was really nice. I’ve seen him on Channel 4 and he was exactly the same, just making jokes and helping. He really knows what he is talking about, he’s not just all talk.”

Blumenthal was helping promote the new Food Preparation and Nutrition GCSE, which will replace the current Food Technology GCSE next year – something he feels will open people’s eyes to the importance of studying nutrition.

Blumenthal’s visit came one month after the school recorded “extraordinary” A Level and GCSE results. Half of all A Levels awarded were at least B grades, while in many GCSE subjects one-third of all students achieved A and A* grades.