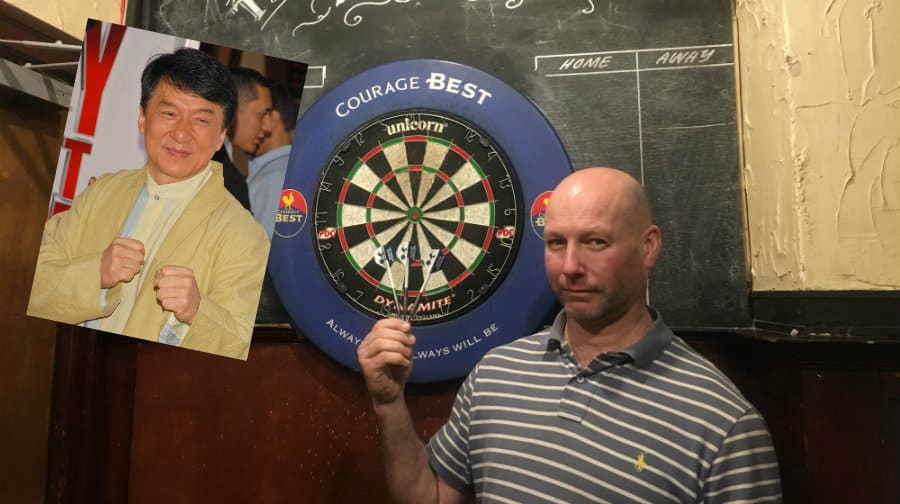 The martial arts mega star popped into The Good Intent in East Street as he was filming near the pub.

Vince McDonald, the pub landlady’s husband, was shocked when the martial arts film star walked into the pub and waved him over for a match.

Vince was impressed with the globally known film star’s throwing arm, but was convinced he would have beaten him in a competitive match.

He said: “He could throw a treble twenty, I’ll put it that way, but I think I could have beaten him. “I just didn’t want him to chop me, so I went a little bit easy on him.”

The 45-year-old gave the globally known film star his personal Tottenham Hotspur set of darts, along with an orange juice, before he was called over for a round in The Good Intent.

Wendy McDonald, the landlady of The Good Intent, with husband Vince

Chan reportedly said he would love to come back, and complemented the owner on the pub. Nobody seemed star-struck and it felt like business as usual, according to pub landlady, Wendy McDonald, 42, when the martial arts mega star arrived about 10:30am last Thursday.

“No one caused a fuss, which is one reason why he probably felt so comfortable being in here,” she said. “It was a huge shock though, of course, and everyone hasn’t stopped talking about it since.”

Filming for The Foreigner, which stars Chan and Pierce Brosnan, was taking place in East Street, near the pub – where the Hong Kong actor and stuntman was spotted in an imported telephone box.

A picture of Jackie Chan filming a scene from the movie in a phone box on East Street, Walworth