Carved with PRIDE – do you have the best Millwall tattoo?

Fans show their inked tributes to the Lions 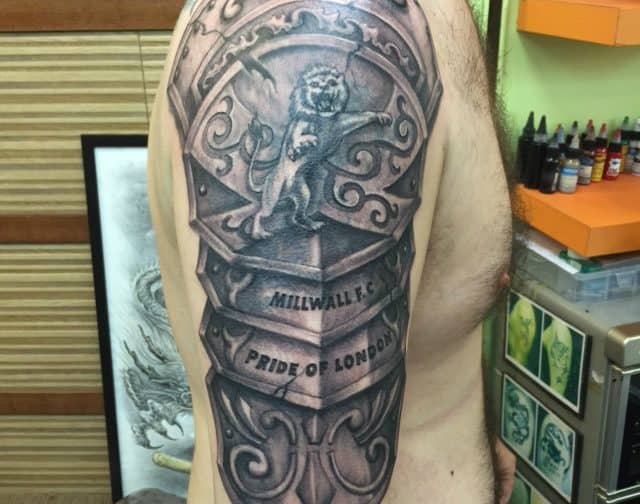 The News is on the hunt for Lions fans who have made their dedication permanent with a themed tattoo.

Over the next few weeks, we will be asking fans to send us in photos of their ink as we track down the best Millwall tattoo out there.

We’ll be highlighting our favourite tats each week, so whether it’s a crest on your chest or a tiny lion on your ankle, we want to see them.

Lifelong fan James Ward was one of the first to reply to our appeal and sent us in a snap of a blue lion on his arm.

He said: “It didn’t hurt as much as people say it would – seeing us get relegated last year was much worse! I got it right after we went down because you never know, in a year of two we might be back up the leagues.

“My dad bought me a kit and everything when I was growing up, I didn’t really have a choice! He brought me to my first game when I was ten and we’ve been going since. I don’t think he actually believed I would get a tattoo when I said I would.”

Do you have a Millwall tattoo? Send a photo to joey@www.newsatden.co.uk to be in with a chance to win the Southwark News Millwall Tattoo Competition.

Southwark NewsNewsCarved with PRIDE – do you have the best Millwall tattoo?