Statues on historic Rotherhithe school to be removed for restoration 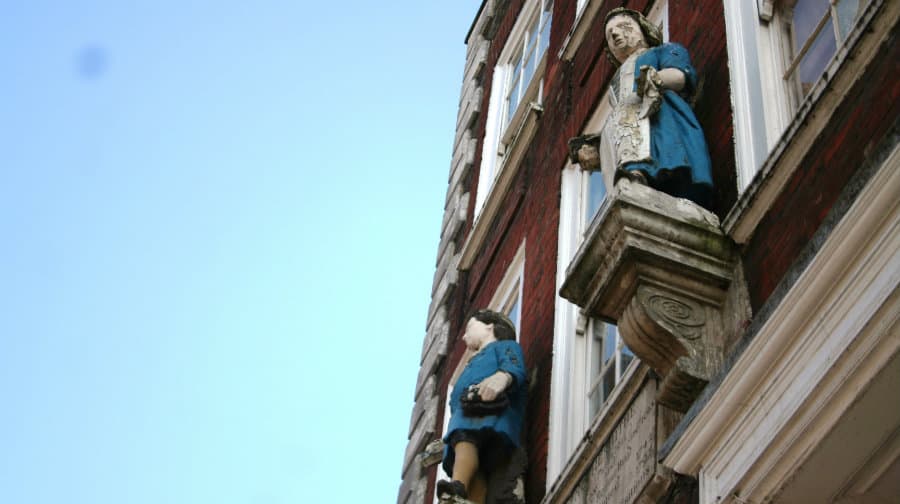 The borough’s oldest school children are getting ready to take their first holiday in two hundred years.

The two statues standing proud above the old Free School in Rotherhithe are being taken for a much-needed makeover to restore their paintwork and brighten their traditional ‘bluecoats’.

The school, which stood in St. Marychurch Street, was founded by Peter Hills, a master mariner, and Robert Bell in 1613.

Under the influence and advice of the good Reverend Gataker of St Mary’s these two men took it upon themselves to establish a school in a humble appendage to the church to educate eight sons of seafarers from the parish.

With donations from the parish the school grew and by 1901 Reverend Edward Josselyn Beck, who had been rector since 1867, recorded in his book Memorials to Serve for a History of the Parish of St. Mary, Rotherhithe, that there were 40 boys and 25 girls in attendance at the school.

One of the Girls would be taken into the School House, lodged, boarded and instructed in household work, “in order to render her more completely fit for service”

In 1739 an amicable fund was set up allowing the school to accommodate 77 boys in total and it was when all the separate funds were amalgamated in 1942 that it became formally known as The Charity School.

In 1795, they splashed out £400 on a house across the road at 70 St Marychurch Street, where the two Coade stone figures have stood overlooking the front door ever since.

On Saturday, February 13, the two statues will be taken down and made available for close inspection to the public for the first time, thanks to the Amicable Society. From 10am till 1pm there will be free but timed tickets available to see the statues at London Bubble Theatre Company, 5 Elephant Lane.