Disappearance of Bermondsey Banksy stirs concern for its future 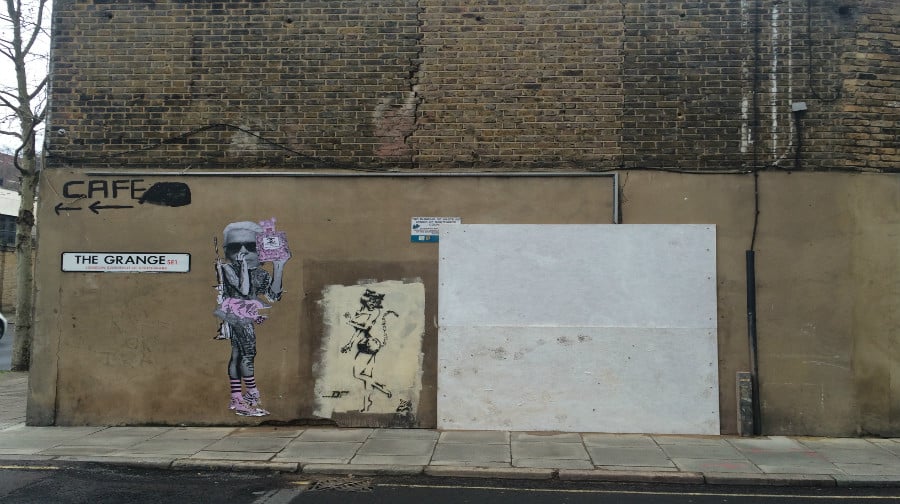 The much-loved Banksy on Grange Road was been boarded up

Mystery surrounds the disappearance of a Banksy artwork in Bermondsey after the elusive graffiti artist’s creation was removed last week.

The painting at the corner of Grange Road and The Grange showed an ominous, hooded character walking a cartoon, Keith Haring-inspired dog. It proved popular with residents and art fans, who flocked to the site when it first emerged in 2014.

However, the section of wall which featured the artwork was boarded up last week, sparking fears that the Banksy had been chiselled off and removed by the building’s owner – possibly for safekeeping or to be sold.

In February last year, the News reported that the mural would be protected by the building’s owner Joe Guner Yusuf Ozlala. However, he and his planning agent did not respond to a request for information about the artwork’s fate.

The original Banksy that appeared in 2014

Local Lib Dem councillor Damian O’Brien told the News: “The Banksy was certainly a local landmark. You’d see people look twice and realise what is was. The building is to be redeveloped so we can only hope the owner has it in safe keeping.”

Previously Banksy artworks have sold at auction for hundreds of thousands of pounds. The most expensive, a painting of Rembrandt complete with googly eyes, sold for £373,841.

Southwark NewsNewsDisappearance of Bermondsey Banksy stirs concern for its future