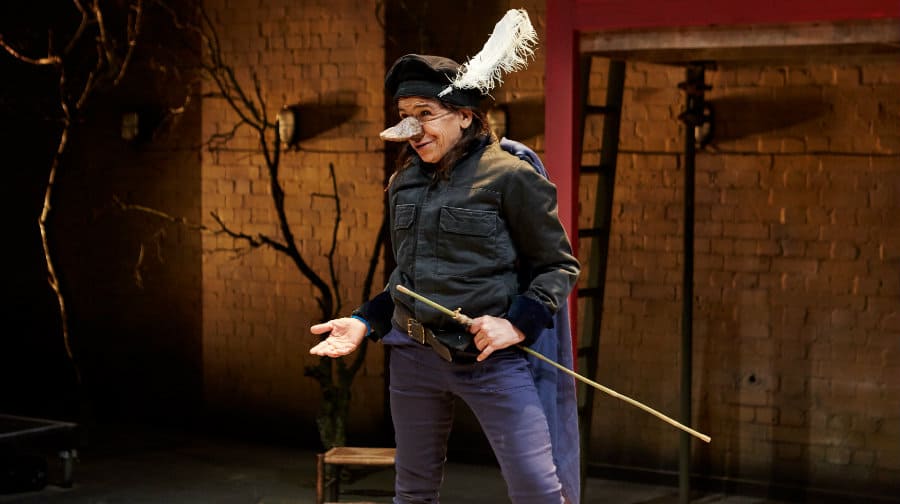 Many of you will be familiar with the plot after watching a certain Steve Martin memorably bring the role in to the Eighties in the classic comedy. The version on offer at The Southwark Playhouse is closer to the French original and offers more in the way of depth and substance.

Olivier Award winner Kathryn Hunter is exceptional as Cyrano de Bergerac, and is wonderfully supported by a superb all female cast. From the start the audience was on board and laughing wildly. The dialogue crackles and the pace is frenetic. We instantly fall for the main characters and become invested in both Cyrano and Roxane, who lead us on a difficult and tragic journey. There were moments of genuine sadness

where you feel the audience gasp with grief, and this is a tribute to the cast who steer the performance from hilarious farce to gut wrenching tragedy seamlessly.

A play apt for our times, in which shallow looks and appearance trump ability and substance, Cyrano de Bergerac succeeds in getting us to admire, and root for, a character whose appearance is dominated by that spectacular disfigured nose, but whose heart and soul are beautiful. The end of the piece was met with rapturous applause that was well deserved, and I left well satisfied and thoughtful. So for something refreshingly different get along to The Southwark Playhouse, a great night.