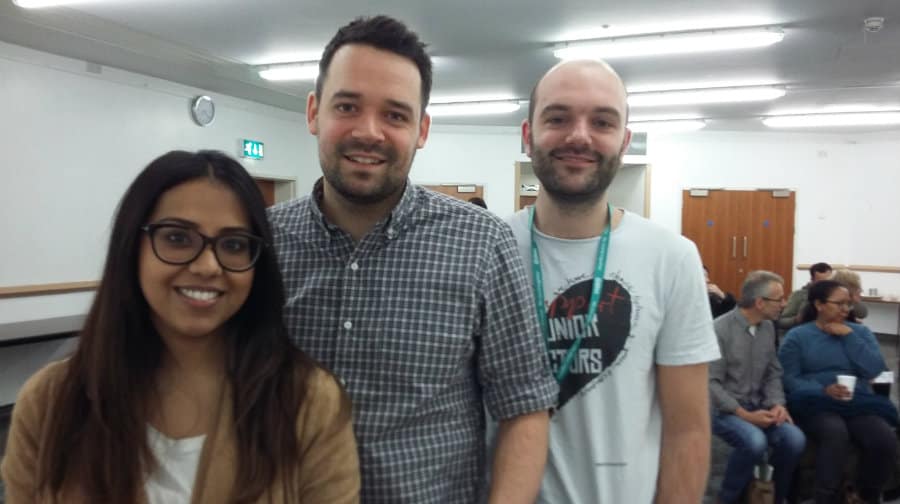 Left to right: Ruhe Chowdhury, Chris James and Will Marsh chair a meeting to discuss a strategy to oppose the government's new contracts

Junior doctors from King’s College, Maudsley, Guy’s and St Thomas’s hospitals are currently holding a 48-hour strike, which began on Wednesday at 9am.

Two more strikes are also planned to begin on April 6 and April 26 against the government’s plan to impose new contracts on doctors, which medical professionals fear will force them to work dangerously long shifts.

Under the new regime, junior doctors’ “normal hours” of 7am-7pm Monday to Friday would be redefined as 7am-10pm Monday to Saturday.

More than 30 attended the meeting, arranged at short notice, last Thursday night at the Albrighton Centre near Dog Kennel Lane.

Chris James, a junior doctor at King’s College Hospital, told the meeting that junior doctors’ morale was “low” and that many felt their future looked bleak in the face of the contracts.

Addressing the meeting, Dr James said: “We need to look at what it would look like if we got all the consultants and nurses involved [in the strikes].

“There’s a real sense that we’re at the front line of something others – consultants, nurses and even teachers – will be affected by down the line. We feel we need to get people from the wider community on board, and we need to reach out to more people.

“It’s not about the details on the contracts now. We now need to fight it [the contracts].”

The government’s plans, led by secretary of state for health, Jeremy Hunt, have also been criticized for scrapping rules that penalise hospitals for overworking their junior doctors. There will be new rules to stop them working more than four nights in a row, and for their maximum hours to be capped at 72-per-week. But all junior doctors would be likely to work two weekends per month.

It is widely believed junior doctors would see a pay cut in real-terms, as the new contracts will mean they earn less for working night and weekend shifts – which would cease to be defined as “unsociable hours”.

Will Marsh, a clinical psychiatrist at Maudsley, stressed the need for junior doctors to muster the same level of campaigning that saved Lewisham Hospital’s A&E from government plans to close it, and downgrade other services, in 2012.

“At Lewisham it’s been unbelievable. I’ve been so touched. We need the same support at the picket line during the junior doctors’ stirkes,” he said.

Will also slated the new contract conditions, saying they would make doctors’ ability to care for people “exceptionally difficult”.

“We are compassionate and caring individuals who want to look after people,” Will said.

“The number of doctors taking hours off work due to stress is going up each year. I think what’s now really striking and sad was that 4,000 junior doctors applied to leave the country last year, and that’s hundreds of thousands of pounds spent on training just wasted.

“From a mental health point of view I value continuity of care, which will be ruined by these longer hours. We know that continuity is what people really value.

“Without continuity doctors don’t get to know their patients and patients will be seen by different doctors who won’t know their background. This will impact on doctors’ ability to deliver compassionate care.”

Ruhe Chowdhury, an oncologist, specialising in the treatment of cancer, was third to speak.

She said: “Since these contracts were set we sent a survey to every oncologist in the country. It came back showing 97 per cent thought the contracts would be detrimental, and that our ability to treat people and access drugs for cancer care would get worse.

“We worked out we will need another 400 consultants to meet the UK’s growing need for cancer care. But 57 per cent said they would leave oncology as a result of these contracts. It worries them so much they’re willing to leave the profession.

“We looked at this contract and we know this is going to have a hugely detrimental effect on our patients and to our lives.”

Graham Fleming, an A&E consultant for King’s College Hospital, said: “I think people need to realise this isn’t an isolated change that will just matter to junior doctors.

“We’re seeing the NHS dissolve between our fingers. It’s going to affect everyone.

“We need to get people to realise this in the same terms as they saw the threat to close Lewisham Hospital and get support from all the medical professions.”