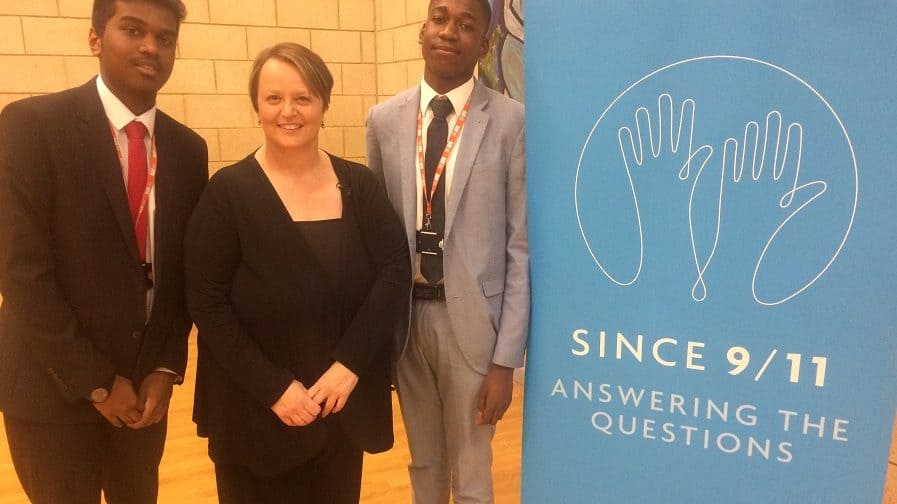 Janice with Dylan and Jeremiah

A survivor of the Twin Towers terror attack has met with students from Harris Boys’ Academy in East Dulwich to tell her story.

Janice Brooks was working on the 84th storey of Two World Trade Centre in 2001, having only arrived in New York that August.

She was working at her desk at 7.30am when the first tower was hit.

In a moving testimony she described how people helped each other escape the building, treating each other’s wounds and carrying those unable to walk.

Sixty-one of Janice’s colleagues were among the 2,977 people who died in the attack.

Her visit to the East Dulwich school was organised by the charity Since 9/11, which focuses on helping students understand what happened in the attack and its impact.

Many of the students Janice met had not been born when 9/11 happened.

Janice said: “Last year I listened to all the news broadcasts on September 11th and not one mentioned the attack,” she said.

“If just one person understands more about what happened because of my visit here then it will have been worth it.”

Year thirteen student Dylan, said: “It’s really touched me and I think I’m not going to take anything for granted and it amplifies that you never really know what’s going to happen so live every moment you can.”

While year twelve student Georgie, said:  “It’s an extraordinary thing she’s doing by coming here. It made me think about the survivors who have to live with the tragedy and it’s still very hard for her.”

Head teacher Peter Groves thanked Janice for visiting the school and talking about her experience.

“We have an obligation to teach students about the events that have shaped the world they live in,” he said.

“I am extremely thankful for Janice for coming to our academy and sharing her story.

“In my lifetime, there has been no more momentous event than 9/11 has been invaluable for our students to have this opportunity to hear from Janice directly.

“It will help them think about how they view the world, and also about the importance of resilience and supporting one another through adversity.”