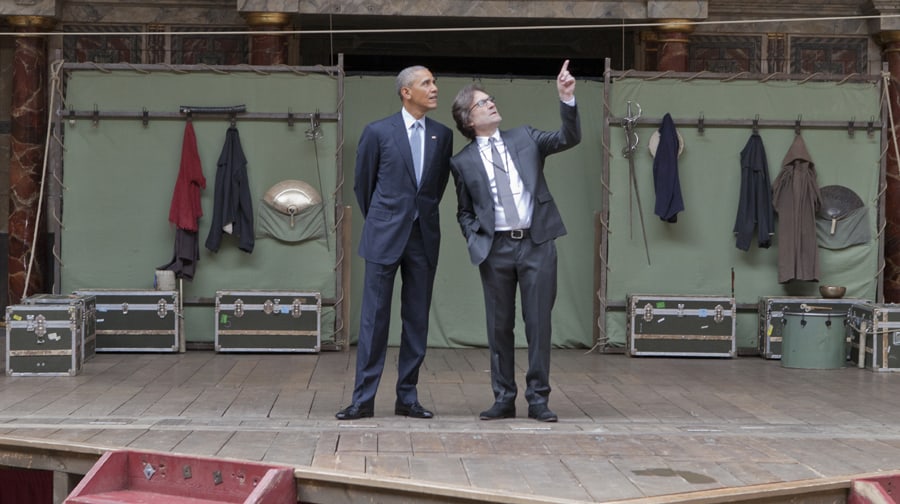 President Barack Obama is given a tour of Shakespeare’s Globe by Patrick Spottiswoode, director of Globe Education. Photo:?Pete Le May

US President Barack Obama and the Duke of Edinburgh visited Southwark last weekend to honour the 400th anniversary of the death of William Shakespeare, writes Alex Yeates…

President Obama was welcomed into Shakespeare’s Globe on the morning of Saturday, April 23, by the cast of Hamlet, who have just returned from a world tour, where he was treated to scenes from the play.

Dominic Dromgoole, Artistic Director of Shakespeare’s Globe, said: “At the end of an extraordinary journey all around the world, it is great to return home to the Globe, and to be able to perform a few scenes and to be welcomed back by President Barack Obama.

“The spirit of ‘Yes we can’ has informed the entire tour, and it’s an honour to meet the man who coined the phrase, and who exemplifies its spirit.”

Meanwhile Southwark Cathedral welcomed His Royal Highness Prince Philip to join a special service celebrating Shakespeare’s life and works. During the service the Globe Young players performed Fear No More the Heat o’ the Sun from Cymbeline and the Globe Winter Season Actors performed extracts from The Winter’s Tale, Pericles and The Tempest.

The Bishop of Southwark, the Rt Revd Christopher Chessun, said: “I am delighted there are strong bonds between Shakespeare’s Globe and Southwark Cathedral, which would have been his parish church. “Shakespeare’s works are still relevant today and it was wonderful to see some of his words performed in the place in which he, his brother and Sam Wanamaker are memorialised.”