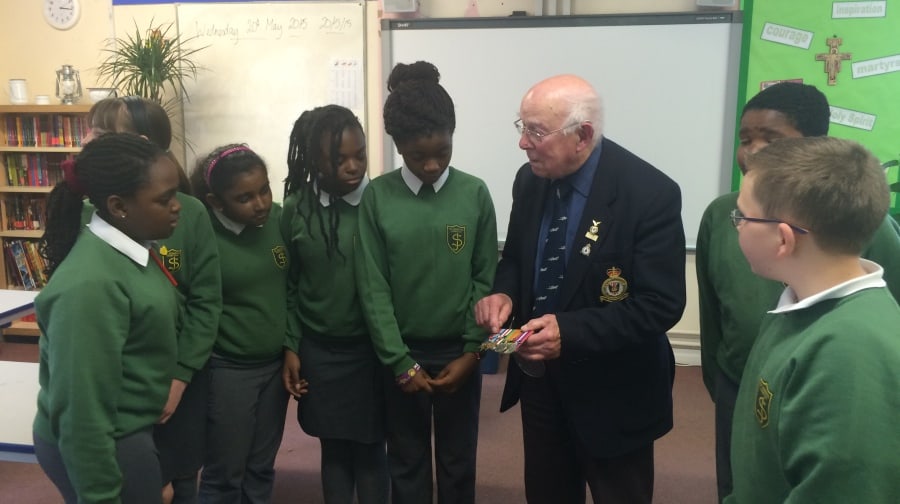 But while he may have lost his hair and gained a walking stick since he hung up his mortarboard, Vic’s memory and wit have remained well and truly intact.

He spoke to an engrossed class of Year 6 students about getting up to mischief during his 1920s childhood, braving WW2 bombs as both a civilian and a RAF navigator, and becoming a teacher at their school.

“Do you know something?” he asked the class. “When I first began teaching I was a rotten teacher. But after a while I loved it and had a great deal of fun. I used to try to make the children laugh, to get them having fun while also learning at the same time. I always think that’s the best way to learn.”

He put this into practice immediately, entertaining the crowd as he encouraged them to shout their questions – ‘I have old ears now’ – and reminiscing about trying to convince his old teacher that it was the answer book, and not his answers, that was wrong.

His wartime stories were absorbing and the pupils did not hold back in their questioning. When one child asked whether he ever felt bad about killing people during bombing raids, he replied: “It wasn’t very nice doing it, but we weren’t trying to kill innocent people. We were trying to fight against the Nazis, about an idea. If they had won the war a lot of you would not be here. Isn’t that worth fighting for?”

After the war, he began working as a teacher at St Joseph’s, then located at Paradise Street. He lived – and still lives – in Oxsted, Surrey, but chose the school so that he could move closer to his late wife.

Vic as a RAF volunteer.

He oversaw some dramatic changes at the school, from designing the colours of the school uniform, moving the school to the current site in Gomm Road and the gradual phasing-out of that old classroom punishment: the cane. “I didn’t like doing it, but I did use it every now and then,” he admitted. Presented with an old ‘punishment book’ from his time as teacher, he read with amazement the names of old pupils and the classroom crimes they committed.

“‘Murray, caning for damage to school property. Smith, caning for repeated misbehaviour. O’Brien, caning for talking by the stairs…’ I did this?!”

He proudly explained how the cane was slowly retired during his time at the school, and warned that ‘in the hands of a cruel teacher, the cane was a horrible thing.’

Vic during his time as head teacher

He ended his final lesson by congratulating the pupils on their intelligent questions and excellent behaviour.

He added: “I feel privileged to have spent so long here and I am extremely proud to see, after all these years, the school still being run so well.”

I worked atr st Josephs when Vic Farmer was the headteacher – he was well liked by all – a lovely guy.
Jim L