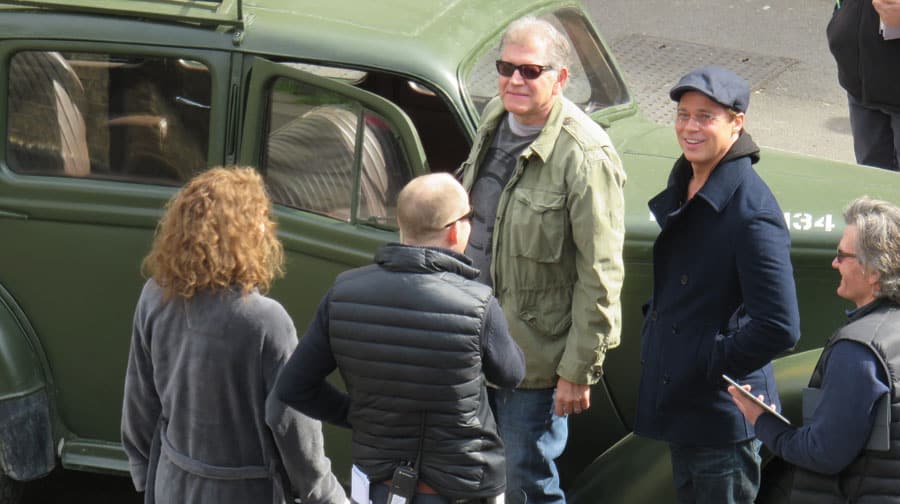 An A-list celebrity surprised star-struck workers in Walworth this week, as he filmed his latest blockbuster, writes Emma Finamore…

Emma Burgin, chief operating officer at Alex Monroe jewellers, was lucky enough to catch a glimpse of the heartthrob.

“He was wearing a pilot’s outfit with a big overcoat – probably not good on a hot day like it was on Friday – but he looked very much in character the whole time,” she told the News.

The jewellery workshop is based in a cobbled mews, making it ideal for filming a period drama. Emma continued: “There were lots of crew and production people going backwards and forwards all day, they put gravel on the ground – it looked like a film set.”

One of the studios upstairs in the building was used as a dressing room, said Burgin, and Pitt was given a gift to remember the experience by.

“We gave him a pair of cufflinks,” said Emma. “The design for our next season has quite a World War II type look, with a plane and propeller. We thought he’d be a pretty good model for them.”

The gift clearly made an impression. “He looked up and thanked us for the cufflinks when he was leaving,” she added. “There was a lot of squealing and plenty of red faces in the office!”

Walworth is no stranger to Hollywood stars: this is the second time Pitt has visited the area on business – in 2011 he filmed part of World War Z on the Elephant and Castle’s Heygate Estate – and in January this year Jackie Chan was spotted filming on East Street.

The martial arts mega star was filming The Foreigner, which also stars Pierce Brosnan, but he took time out of his schedule to pop into local pub The Good Intent for a drink and a game of darts with the landlady’s husband.

Pitt was joined on set last week by co-star Marion Cotillard; a French actress who has taken the lead in high profile films including Macbeth, Inception and Woody Allen’s Midnight in Paris.