A jumbo momument would make a stamp on Elephant and Castle

But developers, Lend Lease, say ‘not on your nelly’ to proposed 10-storey-high building 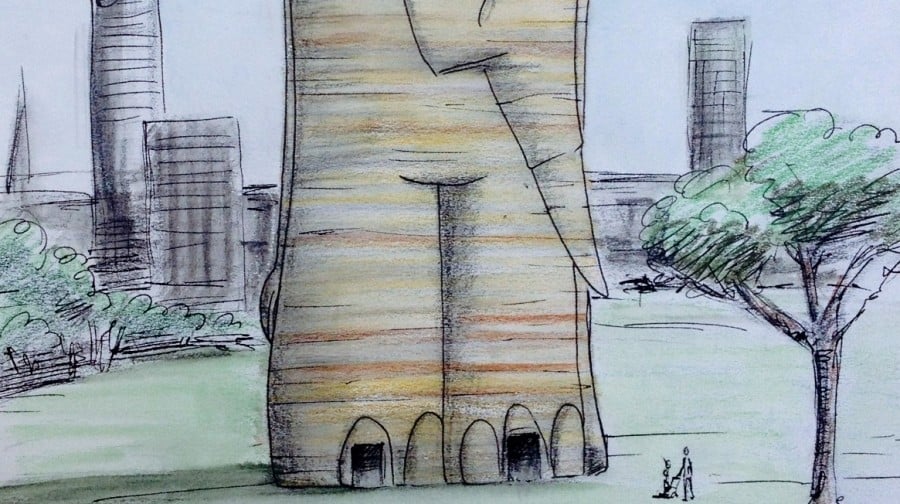 A sketch of the mammoth monument proposed for Elephant and Castle

A ten-storey-high elephant made of earth has been proposed as an “unmistakeable” monument for the new-look Elephant and Castle.

The 40 metre monolith would be sculpted from the ground dug up from developments in the area and compressed to form an elephant-shaped building.

The lower floors would house a branch of the London Museum showcasing the borough’s history and a viewing tower would be the ‘castle’ sitting atop the mammoth mammal.

Artist Dominic Snow has been developing the idea since he first rode through the Elephant and Castle in 1991 and was disappointed not to see a significant landmark of the same name.

“The Elephant and Castle is one of the most unique names in the world – it deserves to have something which represents it in an unmistakeably unambiguous way,” said Dominic, who has been disappointed at the lack of enthusiasm shown by Elephant Park developers, Lend Lease.

“This is crazy. If people knew they could have this… but developers want to have something relatively generic,” said the builder and university lecturer. “They’ve got some nice ideas but nothing to blow your socks off. I want to give them something to blow their socks off.

“For me it’s inconceivable that the developer of an area with such a gift of a name as the Elephant and Castle is not proposing to build a giant elephant,” he added.

Dominic, who lives in east London, is convinced the jumbo-sized earth elephant would bring tourists from far and wide to the future Elephant Park, where the Heygate used to be. But Lend Lease says the design is unsuitable for their development.

A Lend Lease spokesperson said: “Throughout our consultation processes we have received various proposals from the community.

“We welcome these contributions, but given the size of this proposal it would significantly impact on our plans for Elephant Park, which already has Outline Planning Approval. It therefore wasn’t suitable.”

Dominic has made 27 carved elephants in total in search of the right design, with ten of the latest made using the experimental rammed earth method to get the right mix for the elephantine spectacle.

Sketch of mammoth monument proposed for Elephant and Castle